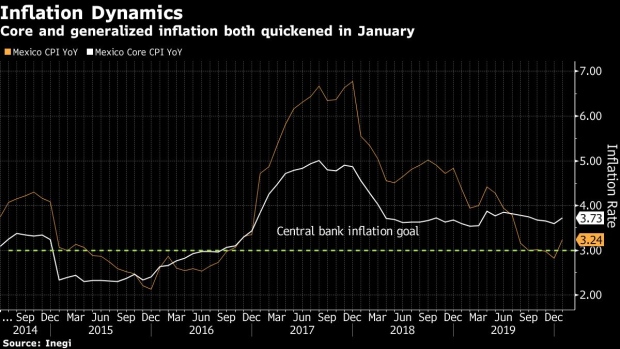 Banco de Mexico reduced its rate to 7% on Thursday, as forecast by all 27 economists in a Bloomberg survey. Prospects for faster, half-point cuts dimmed after the number of board members advocating a more aggressive approach fell in December and inflation accelerated.

Investors have slashed Mexico’s 2020 growth estimates to 1% from 1.7% six months ago after the economy contracted last year, according to preliminary data. Even after reducing the key rate by one percentage point in 2019, Mexico has the highest real rate among Group of 20 nations, meaning there’s plenty of space to cut.

But core inflation, which excludes more volatile food and energy prices and has been a recent focus for the central bank, quickened in January and remains above policy makers’ 3% goal. That means board members will likely continue a measured approach to easing.

“In the face of a rebound in inflation, the central bank has to appear cautious and prudent -- that they’re cutting but not going out of their way to ease aggressively,” Alonso Cervera, chief Latin America economist at Credit Suisse Group AG in Mexico City, said before Thursday’s decision.

Policy makers have been lowering rates since August as declining oil output and uncertainty over President Andres Manuel Lopez Obrador’s policies stalled the economy. Central bank Governor Alejandro Diaz de Leon in a year-end interview foreshadowed Thursday’s move, saying that the board could act on monetary policy if inflation and internal and external risks remained low.

Mexico’s peso has provided one point of stability. Often used by investors to bet on emerging markets due to its abundant liquidity, the currency last week touched the strongest level in nearly a year and a half. The main attraction has been the better yield on peso-denominated debt due to Mexico’s higher borrowing costs.

The peso has been the best performing major currency against the dollar in 2020 despite global concern about the spread of the coronavirus.

Given Mexico’s relatively high real rates coupled with economic weakness, analysts expect the central bank to slash borrowing costs by another half point in the rest of 2020, ending the year at 6.5%. JPMorgan Chase & Co. expects additional quarter-point cuts at the next policy meetings in March and May.

Despite the economic slack, some consumer price risks persist. Aside from its concern over core inflation, the central bank expects the headline number, which accelerated to 3.24% in January, to average 3.5% in the first quarter before slowing to 3% by year-end.

--With assistance from Rafael Gayol.

To contact the editors responsible for this story: Juan Pablo Spinetto at jspinetto@bloomberg.net, Robert Jameson