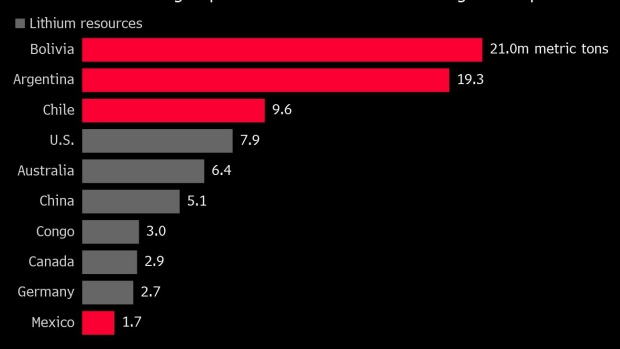 Unlike other metals such as gold and silver, lithium is a strategic mineral like oil that belongs to the nation, AMLO, as the populist president is known, told reporters in Mexico City on Wednesday, announcing plans to create a state lithium company.

While Mexico has yet to produce lithium commercially, previous governments granted exploration concessions including to Bacanora Lithium Plc, recently acquired by China’s Ganfeng Lithium Co., for areas in Sonora state. AMLO called for an investigation into how concessions were awarded given they don’t benefit Mexicans.

“Lithium is going to be exploited by the nation,” he said when asked about permits in Sonora. “Just so it’s clear: Lithium doesn’t belong to the government or the state. Lithium belongs to the people and the nation of Mexico.”

The president’s comments are the latest sign of growing resource nationalism around the world as government authorities look to gain a bigger share of profits from the key component in rechargeable batteries. Lithium prices are surging to record highs alongside booming demand for electric vehicles.

In Chile, the biggest producer of lithium after Australia, President-elect Gabriel Boric also wants to create a state producer as the country drafts a new constitution that enshrines the rights of local communities and the environment. Last month, the government of Serbia canceled a lithium project being developed by Rio Tinto Group after a series of protests. Growing nationalism threatens to slow supply growth needed to feed the transition toward electrified economies. That said, investment headwinds in Mexico will be of little immediate consequence for the global market given the country is expected to account for just a small fraction of lithium supply in the coming years.

Last year, Bacanora said it was plowing ahead with construction of Mexico’s first mine even after the government laid out plans to stop granting contracts to private companies. The company didn’t immediately respond to a request for comment on Wednesday.

“The exploitation of lithium is special,” AMLO said, “and it has already been decided that lithium is going to be exploited for the benefit of Mexicans, for Mexicans and by Mexicans.”