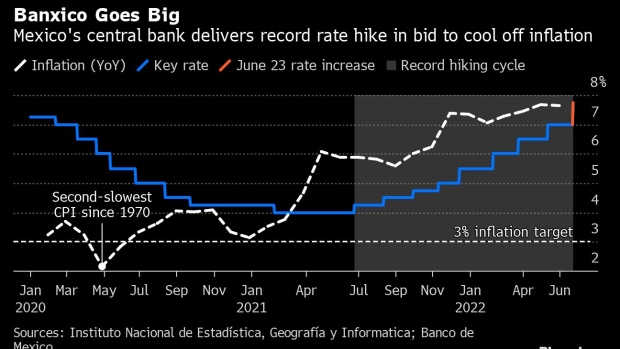 (Bloomberg) -- Mexico’s central bank accelerated the pace of its interest rate increases Thursday, delivering the country’s biggest ever hike and signaling willingness to keep boosting rates at the same pace if needed.

The board of Banxico, as the bank is known, unanimously voted to raise its key rate by 75 basis points to 7.75%, as expected by all 27 economists in a Bloomberg survey. The increase, the largest since the bank adopted an inflation targeting system in 2008, matched the Federal Reserve’s hike last week as Banxico tends to follow its US counterpart to avert abrupt capital outflows. Early-June data published Thursday showed annual inflation running at a 21-year high.

“For the next policy decisions, the Board intends to continue raising the reference rate and will evaluate taking the same forceful measures if conditions so require,” the five-member board wrote in a statement accompanying the decision.

Inflation has accelerated steadily since Latin America’s second-largest economy exited the worst of the pandemic last year and, as in other countries, was given an extra push with Russia’s invasion of Ukraine in February. Banxico started tightening monetary policy a year ago, initially with small, 25 basis-point increases, and since December has doubled that pace, without managing to tame the price spike.

“The statement is straightforward: the 75-point hike was not a oneoff but a change in normalization pace, and we should expect more hikes of this magnitude,” said Pamela Diaz Loubet, Mexico economist at BNP Paribas. “The unanimous decision and the clear forward guidance enhance Banxico’s more reactive monetary policy function.”

The bank sees inflation peaking at 8.1% in the third quarter of 2022, having previously estimated it would top out at 7.6% in the second quarter. Inflation will end the year at 7.5%, it projected, up from 6.4% in its last forecast.

In its statement, the bank said the balance of risks for inflation is now “significantly” to the upside, citing pressures on agricultural and energy prices due to Russia’s war in Ukraine, persistent inflation on non-volatile goods and exchange-rate depreciation.

Earlier Thursday, Mexico’s statistics institute said inflation hit 7.88% in the first two weeks of the month from a year earlier, above all forecasts and more than double the central bank’s target of 3% -- plus or minus 1 percentage point.

Inflation “keeps surprising us in a negative way -- every time the consumer price index is released, it’s higher than the expectation,” Joan Domene, senior economist for Latin America at Oxford Economics, said before the decision. “That means there are big problems.”

More concerning for policy makers, core inflation, which strips out some energy and food prices and is seen as a better predictor of future price readings, rose 7.47% in the same period, also above analysts’ expectations.

Banxico’s increase Thursday means that the central bank has boosted borrowing costs by 3.75 percentage points since June 2021, almost doubling the key rate in the period.

The unanimous vote was a “good” sign, since it “shows that all the board supports fighting inflation forcefully,” said Carlos Capistran, chief Mexico and Canada economist at Bank of America.

The decision to increase the pace of the tightening was largely telegraphed to markets, with Deputy Governor Jonathan Heath saying earlier this month that he expected the board to hike by a greater magnitude. Heath also said he was in favor of two or three consecutive 75 basis-point hikes, signaling the start of a faster cycle.

None of that prevented inflation expectations from coming unmoored. Analysts surveyed by the central bank see both the headline and core readings ending this year and next above target.

“What’s at risk is not just this year’s inflation, but the inflation for the next few years,” Gabriela Siller, director of economic analysis at Banco BASE in Monterrey, said before the decision. “If the long-term expectations de-anchor from the 3% goal, that is when inflation becomes out of control.”

Adding impetus to Banxico’s more aggressive response was the fact that the Federal Reserve’s decision last week was its biggest since 1994, and policy makers see rates rising to nearly twice their current level by year-end.

Banxico keeps a close eye on the spread between its rate and the Fed’s, as any narrowing in the nation’s rate advantage relative to the US could cause capital outflows and spur inflation. The US is by far Mexico’s biggest trading partner.

“Much of the capital flows that enter and exit Mexico are from the United States,” Siller said. “It’s good to maintain the differential between their interest rates.”

For an economy that only narrowly avoided falling into recession at the end of 2021, higher borrowing costs add to the headwinds it’s facing. Even now, economists surveyed by the central bank forecast growth of just 1.76% this year and 1.94% in 2023.

To Siller, though, too many other factors argued in favor of Thursday’s outsized move.

“By being decisive with this rate increase, it can fortify its own reputation and help contain inflation expectations, especially long-term,” she said.