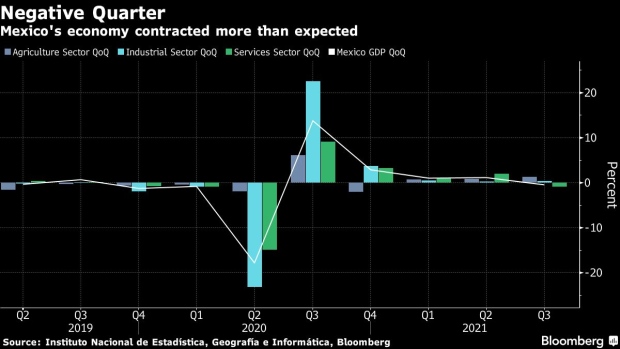 Shoppers and employees walk through a Walmart de Mexico SAB store during Buen Fin in Mexico City, Mexico, on Saturday, Nov. 16, 2019. Buen Fin seeks to revive the economy by encouraging consumption by offering consumers discounts throughout the country for four days. , Bloomberg

Gross domestic product fell 0.4% from the previous three-month period, more than its preliminary 0.2% drop and the median estimate of a 0.3% fall in a Bloomberg survey. It’s the first contraction since the second quarter of 2020, when Mexico imposed its harshest set of restrictions to tackle the Covid-19 pandemic. From a year ago, GDP grew by 4.5%, according to final data from the national statistics institute published Thursday.

The quarterly contraction halts the recovery of Latin America’s second-largest economy, which is far from returning to pre-pandemic levels after suffering last year its worst recession in almost a century. It also contradicts President Andres Manuel Lopez Obrador, who has repeatedly said the economy is doing well despite his decision to avoid additional public spending to support households and companies during the pandemic.

“Instead of demanding new loans, it seems firms and households are more focused on paying down their debt. That saps growth from the economy,” said Nikhil Sanghani, a Latin America economist at Capital Economics, who described the government’s austerity drive as part of the economic problem. “It could lead to longer-term scars from the crisis.”

Mexico in April passed a law banning most subcontracting in an effort to fight tax evasion and ensure employers cover benefits. The measure helped to boost formal hiring, but hit service companies dedicated to labor outsourcing. The country also saw a jump in coronavirus cases in August, leading to an unexpected drop in economic activity that month.

The services sector shrank 0.9% in comparison to the previous three-month period, while the agriculture and the manufacturing sectors grew 1.3% and 0.3%, respectively.

A separate report showed Mexico’s economic activity unexpectedly declined 0.43% in September from the month prior, compared with economists’ forecasts for 0.3% growth.

“Economic activity is not only losing dynamism,” said Janneth Quiroz Zamora, vice president of economic research at Monex Casa de Bolsa. “For the second consecutive month, it was negative. With that, the time that it will take to recoup the ground lost during the pandemic will extend for various months more.”

Inflation has hovered around 6% for the past few months and accelerated to more than 7% in early November, also hurting domestic demand. Market confidence in the central bank’s ability to tame price increases was dented this week when Lopez Obrador pulled his nomination of former Finance Minister Arturo Herrera to head the central bank. The new nominee is lesser-known Victoria Rodriguez, who is in charge of spending at the Finance Ministry.

The services sector was a major contributor to the downward revision to the preliminary third-quarter data, though economists says the negative effects of the outsourcing law are likely to be temporary. Slower-than-expected in industrial production, reflecting ongoing supply-chain issues, also contributed to the poor economic performance.