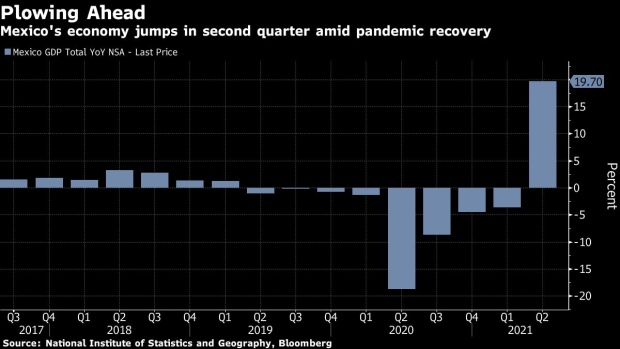 (Bloomberg) -- Mexico’s economy grew less than expected in the second quarter as demand from the U.S. as well as improving domestic consumption translate into a gradual recovery.

Gross domestic product rose 1.5% from the previous three-month period, less than the 1.8% median estimate in a Bloomberg survey. From a year ago, GDP grew by 19.7%, according to preliminary data from the national statistics institute published Friday.

Latin America’s second-largest economy has gained steam since earlier this year, spurred first by U.S. demand and later by domestic consumption, especially in the services sector. The central bank boosted the recovery by cutting its interest rate to a multi-year low before spiking inflation forced it to reverse course in June. Analysts in a Citi survey have raised their 2021 growth forecast steadily and now foresee 6% expansion.

Services grew 2.1% from the previous quarter, while agriculture expanded by 0.6% and manufacturing rose by 0.4%, according to the statistics institute.

“Manufacturing activity, however, remains under strain due to ongoing supply issues, particularly semiconductors, which is still hurting the auto industry, but we expect conditions to gradually normalize,” he said.

Still, many Mexican businesses and consumers have adapted to the pandemic. That trend means, in the unlikely event that new closures are required, they would only lower this year’s growth forecasts by half of a percentage point, said Pamela Diaz Loubet, an economist at BNP Paribas Mexico SA.

“Companies have adopted new methods to diversify their production chains,” Diaz said. “They have a greater offering of products, and they’ve adopted new technologies and new digital platforms, which have made them more resilient.”

For Deputy Finance Minister Gabriel Yorio, the nation’s recovery will be on even better footing later this year. “Conditions are right for the recovery of the Mexican economy and strengthening of public finances in the second half,” he said on Thursday.

(Updates with details and economist comments starting in fourth paragraph.)