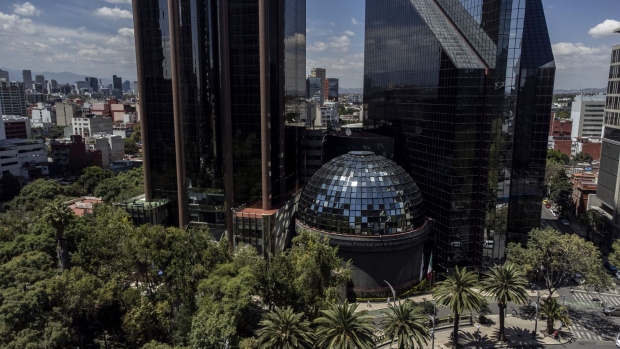 (Bloomberg) -- Mexico is considering changes to its stock market law to entice family-controlled companies to go public in a bid to end a years-long drought in public listings and help attract more investors to Latin America’s second largest economy.

The reforms being reviewed by regulators and government officials would both allow dual-class share listings and make it easier to block hostile takeovers, according to people with knowledge of the discussions and a draft proposal seen by Bloomberg News. Deputy Finance Minister Gabriel Yorio said on Thursday the government was “very close” to a final version of a bill that would also simplify the process to list securities in Mexico.

Mexico’s equity market has lagged behind those in Asia and regional peer Brazil in terms of new offerings and interest from foreign investors, while it also has a smaller domestic investor base and weaker local demand. The reform seeks to address one issue frequently cited by potential issuers as a hurdle.

Most of Mexico’s listed companies are majority controlled by families and the measures would offer protection to the many closely-held operations in Mexico that may want to sell shares to the public, but fear losing control of their businesses, the people said.

If Mexico follows through with the plan it would be joining other markets like New York and Brazil, which allow listings of shares with different voting rights. London, Hong Kong and Singapore made such a move in recent years in order to attract more founder-led tech companies that want to list and still maintain outsized control. Mexico has not had a major public offering in five years.

Read More: Mexico Stock Market Is So Dead That Buyouts Are the Only Action

The head of Mexico’s banking and securities regulator CNBV, Jesus de la Fuente, hinted at some of the changes during a meeting with the nation’s brokerage association late Tuesday.

A new bill under discussion would “seek to encourage companies to obtain financing without affecting their ability to make relevant decisions within their corporations,” he said. “A very important aspect is that only ordinary shares are issued,” he added, without providing further detail on the matter.

Yorio said Thursday that the reform would have a big impact in the way small companies can seek financing and that is was based on input from market participants.

The draft proposals seen by Bloomberg would allow for stock structures with limited voting rights. Mexican regulators restricted dual-class listings in a 2005 reform to the stock market law as part of a push to improve corporate governance and minority protections.

The changes would also make it harder for minorities to block any attempt by a company board to introduce measures in its bylaws to prevent hostile takeovers. The proposal would raise the threshold to oppose changes from 5% of shareholders at meetings to 20%. And it axes restrictions on the types of measures companies can impose to prevent hostile takeovers, the documents show.

The final shape of the bill is still under discussion, according to one of the people familiar with the talks. He said the government may present the bill before the end of the year but that it could also be delayed until February since lawmakers have been busy with the approval of the budget and other measures.

De la Fuente said the bill would also include a simplified registration process to spur more listings. Mexico’s brokers association AMIB has been pushing since last year for a debt registry similar to 144A rules in the U.S., which allow exchanges and brokers to effectively approve issuances for institutional investors rather than the local regulator, enabling companies to sell debt more quickly. Smaller companies are seen as benefiting from the simplified registry.

(Updates with official’s comments in paragraphs two and eight.)