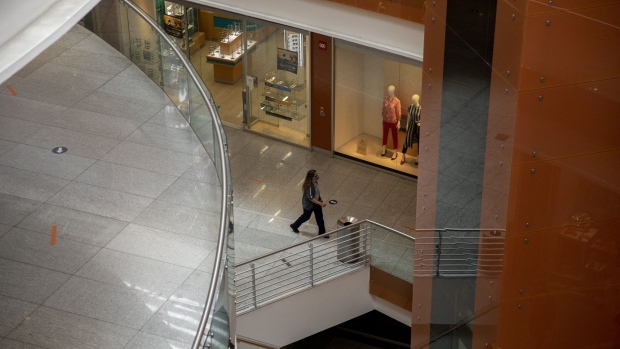 A shopper wearing a protective mask walks inside the Parque Delta shopping mall in Mexico City, Mexico, on Wednesday, July 8, 2020. Mexico overtook Spain and France this weekend as the pandemic’s toll on the country continued to mount. Photographer: Alejandro Cegarra/Bloomberg , Bloomberg

(Bloomberg) -- Mexico’s economy recovery will take longer than expected and will depend on the evolution of the coronavirus pandemic, Finance Minister Arturo Herrera said.

International consensus was for a two-month lockdown followed by a fast economic recovery, Herrera said during a virtual meeting of G20 finance ministers and central bank governors.

“The recovery horizon will be longer, as long as a vaccine or an effective treatment isn’t available,” Herrera said, according to a finance ministry statement. “Economic policy, particularly fiscal and financial policy, must adjust to the new reality.”

The Mexican economy slumped a record 20% in April after most activity stopped to prevent the spread of the Covid-19 virus. Gross domestic product will contract 10.5% this year, exceeding the estimated decline of peers including Brazil, Russia, South Africa and India, according to the International Monetary Fund.

Since the start of the pandemic, the central bank has cut borrowing costs 2 percentage points to 5%, near a four-year low. Central Bank Governor Alejandro Diaz de Leon estimates that 12 million people have lost their jobs in the crisis.