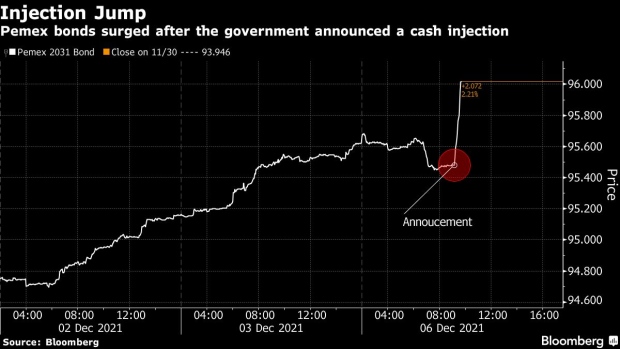 (Bloomberg) -- Petroleos Mexicanos, the world’s most indebted oil company, will get a $3.5 billion cash injection from the government as President Andres Manuel Lopez Obrador orders a new business plan for the struggling company.

The state-owned producer will use the funds to pay down obligations and also embark on a serious of bond buybacks and new issuance to reduce the cost to service its debt. As part of the initiative, Pemex will also overhaul its five-year business plan, according to a statement released by the company Monday.

Lopez Obrador’s latest effort to show support for Pemex, which has a 90-year legacy in the country and for many years provided a huge chunk of the federal budget, comes after more than a decade of declines in output and limited investment in new fields. While the announcement appeared to provide some short-term support for the embattled company, analysts are skeptical that it will be enough to revive operations.

“It seems to be a continuation of what they have been doing: a direct transfer from the Mexican government, and trying to change the debt from the short and medium to the longer term,” said Alejandra Leon, Latin America upstream director at IHS Markit. “The critical part is whether there are changes in the operation that generate sufficient resources to deal with the debt, and that’s still unknown.”

Leon said she couldn’t be sure that the transactions announced today will ultimately reduce Pemex’s debtload, because the details on the plans to buy back some notes and issue new bonds were unclear.

Still investors seemed to be encouraged, with Pemex’s benchmark bonds due in 2031 rising 1.2 cent to 96.5 cents on the dollar, reducing its yield to 6.4%.

The liability management transaction won’t include bonds coming due in 2022 and 2023 since the government has already vowed to cover them, according to the statement. Pemex chief executive officer Octavio Romero had revealed that pledge in October. The government also previously announced plans to reduce the company’s profit sharing duty to 40% next year.

Lopez Obrador and Finance Minister Rogelio Ramirez de la O have promised to do whatever it takes to prop up the oil giant, with the president even saying that its bonds are equivalent to sovereign debt. Lopez Obrador, widely known as AMLO, has made Pemex the focus of his strategy to revive the Mexican economy by making it self-sufficient in gasoline, and he’s rolled back the liberalizing energy reforms of his predecessor to give Pemex a bigger role in the domestic market.

Holders of Pemex bonds coming due in 2024 to 2030 will receive cash and new notes in an exchange offer while investors with securities maturing after 2044 will be paid cash for their holdings, according to the statement.

In addition to the transaction, Pemex will reformulate its five-year business plan “to include detailed actions necessary to strengthen its financial position in the medium and long term, as well as to prepare Pemex for the challenges the energy sector will face in the following years,” the statement said.

AMLO’s energy policies have been criticized by investors for allocating more resources to Pemex’s unprofitable refining business and reducing crude exports in order to send oil to its refineries instead. International credit ratings companies such as Fitch Ratings and Moody’s Corp. have downgraded Pemex’s bonds to junk in recent years, in part because they say it has no clear strategy to reverse production declines.

“There is no meaningful evidence that the ship has been righting, that any of the underlying issues that plague Pemex have been resolved,” said John Padilla, managing director at energy consultancy IPD Latin America. “What I would say is that administration after administration have almost singularly focused on the financial aspects and I think what we are seeing is that the financial aspects are one of the least of its worries.”

(Updates throughout with analyst comments and information from Pemex statement.)