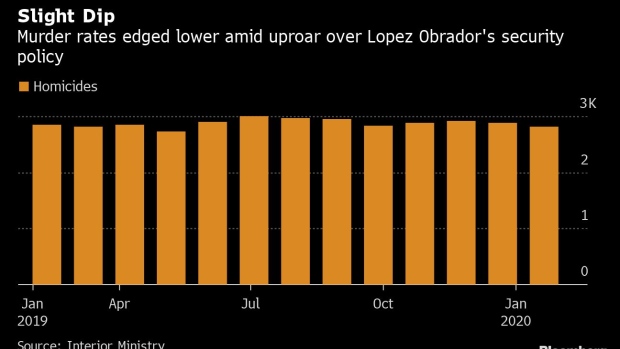 (Bloomberg) -- Mexico’s murder rate fell in the first month of the year as President Andres Manuel Lopez Obrador has pledged to improve security amid protests over recent brutal killings of women.

Murders in Mexico dropped 1.2% to 2,819 in January, down from 2,854 the first month of last year, according to the Interior Ministry. The month followed the most violent year on record.

A decrease in the murder rate “is certainly welcome but the key issue will be whether the drop is sustainable over several months and Mexican residents start to see real improvements in the overall security situation in the country,” said Maureen Meyer, the Mexico Director at the Washington Office on Latin America, a D.C.-based think tank. Meyer made the comment before the data was released.

While the data showed a decrease for January, the country’s popular president has come under increasing criticism for his reaction to recent high-profile killings of women, which have put a spotlight on soaring gender-based violence nationwide. The number of gender-based murders of women in the country, categorized as femicides, rose to 1,006 last year, up from 912 in 2018.

“The anger right now is, first, about the dismissiveness with which Lopez Obrador has addressed the problem,” Meyer said. “And second, all of the actions that his government has put in place over the past year haven’t made any real dent in addressing femicides and violence against women.”

Feminist groups staged two major protests outside the National Palace in February to protest the brutal murders of Fatima, a 7-year-old girl, and Ingrid Escamilla, a 25-year-old woman who was found dismembered. Protesters sprayed graffiti across the palace and disrupted Lopez Obrador’s morning press briefing.

The protests sparked a national debate and put Lopez Obrador on the defensive, with the hashtag #JusticeForIngrid and #Fatima quickly spreading across social media. In response to criticism, the president repeated that he won’t fight violence with violence, and plans to restore values and revert social decay.

“I insist that the causes must be addressed,” Lopez Obrador told reporters in a Wednesday morning press conference. “There must be severe laws, punishments, jail, coercive measures, but the main thing is to fight for a better society.”

This is not the first time Lopez Obrador has been criticized for his approach to security. In October last year, Lopez Obrador’s security cabinet decided to release the captured son of kingpin Joaquin “El Chapo” Guzman to avoid a firefight that could have killed civilians. Later, in November, nine members of a Mormon family with dual American-Mexican citizenship were killed in an attack by cartel gunmen.

While cartel violence is the driving force behind Mexico’s high murder rates, the government has resisted a heavy-handed crackdown and the militarization that characterized the approach of former President Felipe Calderon between 2006 and 2012. Lopez Obrador has preferred to deploy a newly-created National Guard and focus on education and subsidies for young people. Mexico has also stepped up extraditions under pressure from Attorney General William Barr and the U.S. administration. Late Thursday, officials announced the extradition of Ruben “El Menchito” Oseguera, the son of the leader of the Jalisco New Generation Cartel.

“The absence of a comprehensive policy that guarantees a woman’s right to a life free of violence in Mexico is in evidence,” women’s advocacy group Observatorio Ciudadano Nacional del Femicidio wrote in a Monday statement. “Day by day, the lack of political will to bring attention to the crime of femicide is exposed to the light.”

(Updates with chart and Oseguera details in 10th paragraph.)

--With assistance from Eric Martin.

To contact the reporter on this story: Justin Villamil in Mexico City at jvillamil18@bloomberg.net

To contact the editors responsible for this story: Carolina Wilson at cwilson166@bloomberg.net, Cyntia Barrera Diaz