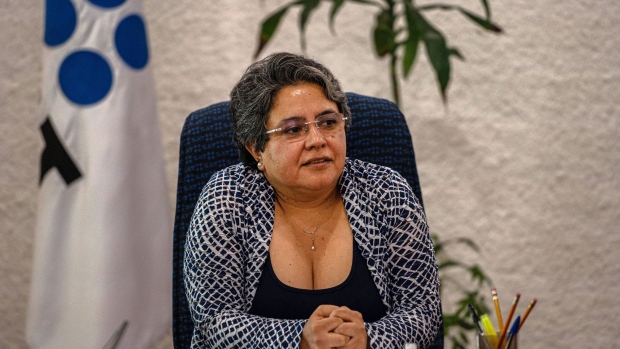 Raquel Buenrostro Sanchez, head of Mexico's tax authority known as SAT, speaks during an interview in Mexico City, Mexico, on Friday, July 16, 2021. Buenrostro wants to crack down on key incentives for global automakers to produce in the country, the government's latest effort to boost revenue by going after large companies. , Bloomberg

(Bloomberg) -- Mexico’s new economy minister will be the tax chief who oversaw a crackdown on big companies for allegedly abusing loopholes, amid a prolonged dispute with the US and Canada over the terms of the North America’s free trade agreement.

Raquel Buenrostro, announced as new economy chief by President Andres Manuel Lopez Obrador during a press conference Friday, has brought billions of dollars to public coffers through settlements with companies and spearheaded battles with some of Mexico’s most influential businessmen. She will replace Tatiana Clouthier, who suddenly resigned this week.

“In some way it’s expected, because Raquel Buenrostro is a tough person, like a soldier. She’s efficient and follows instructions perfectly,” said Valeria Moy, director of the Mexican Institute for Competitiveness, a think tank in Mexico City. “She’s close to the president and is a useful player that the president is going to put wherever he has to resolve a problem.”

Buenrostro studied mathematics at the National Autonomous University of Mexico and went on to earn a master’s in economy at the Colegio de Mexico. She served as a deputy general manager in the Finance Ministry and worked as fiscal official in Mexico City’s government, in addition to taking on roles in the education ministry, the tourism ministry, and the state oil company.

Lopez Obrador’s third economy minister in almost four years in government, Buenrostro arrives at a delicate time for the role, which focuses on trade and the promotion of exports and Mexican companies.

Mexico is in difficult negotiations with its major trading partners, the US and Canada, because of their allegations that the energy policies of Lopez Obrador discriminate against foreign firms. The president has sought to reinforce the power of Petroleos Mexicanos, the state oil company, and the Comision Federal de Electricidad, rolling back some of the privatization pushed by prior governments. Separately, Mexico has complained the US has misinterpreted the rules of the auto trade.

The countries agreed to extend talks on the energy issue beyond the limit outlined in their trade agreement, delaying the involvement of a possible arbitration panel, which could be damaging for Mexico.

Analysts say that Buenrostro’s arrival signal a hardening of president’s stance, as the countries have sought to plow forward with high-level economic talks, despite their conflict, the tone of which has rankled the nationalistic president, known as AMLO.

“What he fails to understand is that this is not a question of negotiation stances but of legality,” said Duncan Wood, a vice president of the Wilson Center based in Washington. “The rules of North American trade and investment will determine the outcomes and lawyers are going to be more important than politicians.”

Clouthier, a political strategist from the industrial north of the country, served as AMLO’s campaign manager in the 2018 presidential election and has been in charge of navigating the relationship with companies and trade partners since being named Economy Minister in late 2020. She had championed Mexico’s role in the growing electric vehicle industry and sought to entice semiconductor companies.

She also wasn’t shy of clashing with those she saw as interfering in Mexico’s policies, including the Texas governor and lawmakers promoting a US-only tax credit for greener cars.

The arrival of another ally of Lopez Obrador on the scene will not necessarily change the broad direction of the talks in a government where the president exercises absolute control.

“No minister of AMLO’s has been capable of making him change his opinion, especially when it comes to question of recouping state power of the energy sector,” said Joan Domene Camacho, senior economist at Oxford Economics. “There have been two economy ministers, and there have already been three finance ministers.”