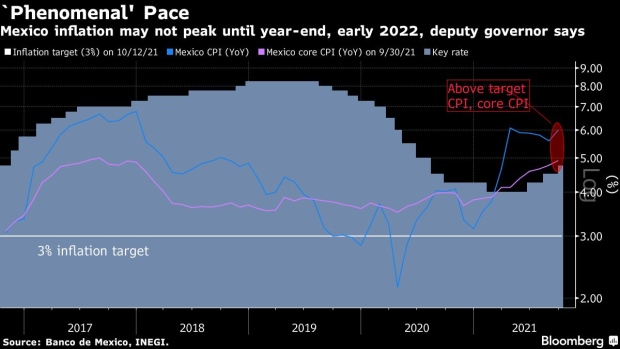 (Bloomberg) -- Mexico’s consumer prices are rising at a phenomenal pace and might not peak until the end of 2021 or early 2022, requiring an appropriate response by policy makers, central bank deputy Governor Jonathan Heath said.

Both internal and external supply shocks have led to an upward inflation trend, leaving no room for expansive monetary policy, Heath, one of the five Banco de Mexico board members, said on a Grupo Financiero podcast released Wednesday.

“It’s easy to see that prices are increasing, and they’re being transferred to consumer prices at a pace that’s really phenomenal,” he said.

The central bank has hiked its key interest rate a quarter point at each of its last three meetings, generating expectations that borrowing costs will hit 5.25% by year-end from the current 4.75%, according to economists surveyed by Citigroup Inc.’s local Citibanamex unit. Banxico is one of many central banks across Latin America that are tightening monetary policy in response to quickening inflation, as economies open back up.

Though many of the supply shocks are external, domestic factors, such as flooding, climate change, and blockades along train lines, have also contributed to the price shifts, Heath said. The central bank’s concern that increases in one sector of the economy would pressure prices higher elsewhere through secondary effects has already been observed, he added.

“If we look at core inflation, we can reach the conclusion that these increases are already generalized,” Heath said.

On the podcast, Heath projected that Mexico’s economy would not return to pre-pandemic peak levels until the end of 2022.

Mexico’s annual inflation accelerated to 6%, double its target, in September while annual core inflation, which excludes volatile items such as fuel, reached 4.92%. Banxico targets inflation at 3%, plus or minus 1 percentage point. The headline rate has been over 3% since June 2020 while core prices were last at target in 2016.

“If inflation remains at levels above 4% for more than two years, well that isn’t so temporary, and there’s an inflationary inertia that’s really worrying and we need to make sure we’re responding correctly,” Heath said.

The bank has been split in its three recent meetings, with Heath and three other members voting in favor of the most recent rate increase, which brought the rate to 4.75%. Deputy Governor Gerardo Esquivel voted against the decision. The board will convene to decide on rates twice more before year-end.