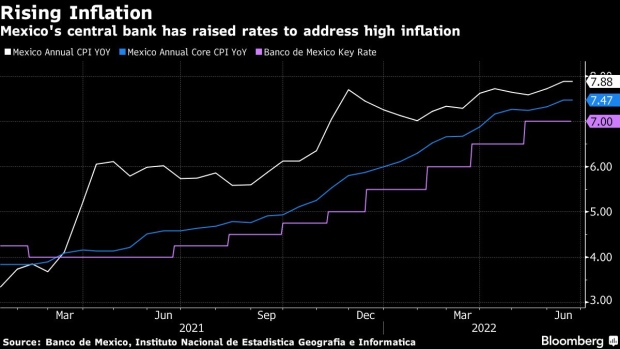 A fruit vendor works at a market in Mexico City. , Bloomberg

Consumer prices rose 7.88% in the first two weeks of the month from a year earlier, above all economist forecasts in a Bloomberg survey that had a median estimate of 7.73%, the national statistics institute reported Thursday. On a bi-weekly basis, prices increased 0.49%, above the 0.35% median projection.

Core inflation, which excludes volatile items such as fuel, rose 7.47% in the same period, more than analysts’ median estimate of 7.32%. The central bank’s eight straight interest rate hikes totaling 300 basis points since last June have so far done little to slow headline and core readings. The bank, known as Banxico, targets inflation of 3%, plus or minus one percentage point.

Later today, Banxico, led by Governor Victoria Rodriguez, is expected raise its key rate to 7.75% from 7%, which would be its biggest interest rate increase since it started an inflation-targeting regime in 2008. All 27 economists surveyed by Bloomberg coincide in the forecast.

The US Federal Reserve also increased borrowing costs by 75 basis points in its last decision, adding pressure for Banxico to do the same.

“This bad statistic is much worse than what we’d expected. It doesn’t change the decision today,” said Jessica Roldan, chief economist at Casa de Bolsa Finamex. “We’d expected the interest rate increase was going to be aggressive, and the only thing this confirms is the baseline scenario, that Banxico will follow the Fed.”

Central bank Deputy Governor Jonathan Heath earlier this month said he expects the board will vote for a 75 basis-point hike in Thursday’s decision, with policy makers facing the decision to maintain that pace or ease up and deliver a half-point boost at its August meeting.

Economists polled by Citibanamex forecast a year-end benchmark rate of 9.5%, up from a forecast of 8% in early April.

Basic food and electricity costs contributed the most Mexico’s consumer price increase in early June. Latin America’s major economies have struggled to tame inflation as Russia’s invasion of Ukraine in late February sent food and energy surging ever higher and as supply-chain troubles that have lasted through the pandemic continue to disrupt businesses.

“What terrible numbers,” said Andres Abadia, chief Latin America economist at Pantheon Macroeconomics. “We expect that price pressures will decrease in the second half of the year, but inflation will be stickier than anticipated.”

Separately, Mexico’s statistics institute said also on Thursday that retail sales increased 4.6% in April compared to the previous year, better than the 4.3% median estimate by economists in a Bloomberg survey.