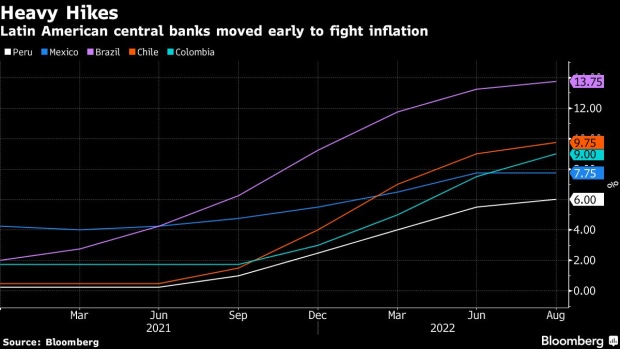 A vegetable vendor hands change back to a customer at the Central de Abastos Market in Mexico City, Mexico, on Wednesday, Jan. 12, 2022. Mexico’s economy is probably in for a rough year in 2022, as the boost it gets from U.S. growth is outstripped by blows from tight fiscal and monetary policies and uncertainty over the government’s agenda. , Bloomberg

(Bloomberg) -- Mexico’s central bank boosted its key interest rate to an all-time high after inflation hit the fastest pace in over 21 years, but dispensed with hawkish forward guidance that it had given in its previous decision.

Banxico, as the bank is known, on Thursday delivered a second straight increase of 75 basis points to the benchmark rate, taking it to 8.5%, as expected by all 24 economists in a Bloomberg survey. Never since the bank began targeting inflation in 2008 has monetary policy been so restrictive, with the previous record being 8.25%.

Yet the bank didn’t repeat the forward guidance telegraphing Thursday’s hike that it had given in its June decision, a move some analysts read as preparing investors for smaller rate increases. In a statement accompanying Thursday’s decision, the board said it “will assess the magnitude of the upward adjustments in the reference rate for its next policy decisions based on the prevailing conditions.”

By removing the forward guidance, Banxico’s statement “opened the door to reduce the pace” of rate increases, said Carlos Capistran, chief Mexico & Canada economist at Bank of America Corp. “We expect Banxico to hike 50bps at its next meeting with risk of another 75bps.”

The rate increase matched the US Federal Reserve’s hike last month, as Mexican policy makers tend to follow their US counterparts to avert abrupt capital outflows. Banxico started with small, 25 basis-point increases and has been going at triple that pace since June, boosting borrowing costs by 4.5 percentage points over the past 14 months and more than doubling the key rate in the period.

“By adopting a more gradual tone, they are implying that the next monetary policy decision will likely be influenced by what happens with the Fed,” said Pamela Diaz Loubet, Mexico economist at BNP Paribas SA.

The bank sees now core inflation, which strips out some energy and food prices and is seen as a better predictor of future price readings, peaking at 7.9% in the third quarter of 2022, up from a previous estimate of 7.4%.

“Our base case is for Banxico to continue increasing rates in line with the Fed until the US monetary policy outlook becomes more certain.”

The board also said in the statement that the balance of risks to inflation “remains biased significantly to the upside.”

Mexican swap rates rose slightly after the central bank announcement, up 2 to 3 basis points across the curve. Before the decision, swaps were pricing about 160 basis points of hikes for the rest of 2022, with the key rate ending year around 9.35%.

Banxico’s next decision is scheduled for Sept. 29.

Latin American central banks started tightening monetary conditions earlier than most global peers, but prices continue rising above target in the region. Argentina’s central bank on Thursday raised its benchmark Leliq rate to 69.5%, representing the largest hike in almost three years, while Peru is expected to also hike borrowing costs by half a percentage point later in the day.

Mexico’s recent data showed more evidence that inflation for volatile items such as energy and food has spread into typically stable key goods. Consumer prices jumped 8.15% in July from a year ago, compared with 7.99% a month earlier. Meanwhile, wages rose 9.5%, the most since 2001, putting more pressure on prices. The bank targets inflation of 3% plus or minus 1 percentage point.

“The inflation data were quite bad, especially core inflation,” Jessica Roldan, chief economist at Casa de Bolsa Finamex, said before the bank’s decision, adding that the key rate could hit 10% this year. “Once we get to such a high level, inflation gets persistent.”

The government says it shaved 2.6 percentage points off price increases, but it hasn’t stoppeadd inflation expectations from coming unmoored. Economists surveyed the local unit of Citigroup Inc see inflation ending the year at 7.74% and don’t see it slowing into the target range in all of 2023, finishing the year at 4.51%.

The bank faces a tough few months, as inflation keeps accelerating while economic growth is expected to slow after US gross domestic product fell in the second quarter of the year. We see “a number of variables that suggest that growth in Mexico is going to be lackluster in the second half of the year,” said Gabriel Lozano, Mexico economist at JPMorgan Chase & Co.