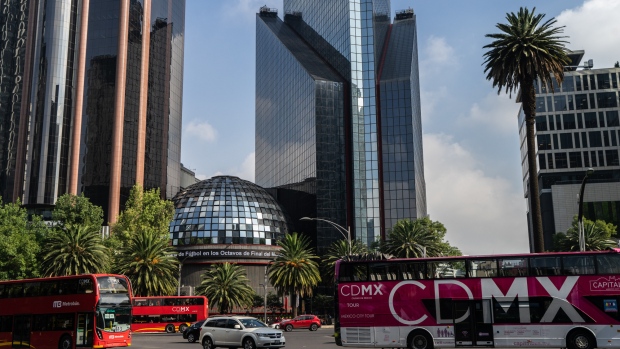 Tour buses pass in front of the Bolsa Mexicana de Valores SAB, Mexico's stock exchange, in Mexico City, Mexico, on Friday, June 29, 2018. With just days to go before Mexico's presidential election, the man leading the polls has said little to nothing about his plans for the finance industry. His silence has some of the country's top bankers fearing the worst. , Bloomberg

(Bloomberg) -- Mexico’s antitrust regulator notified top banks that its investigator found probable evidence of cartel-like practices to manipulate government bond prices, according to people with knowledge of the matter.

At least one bank received in-person notification this week that the regulator, known as Cofece, would try the case, said the people, who requested anonymity because the matter is private. Seven financial institutions in total were notified, another two people said. Cofece declined to comment.

The regulator’s investigative unit has spent nearly three years probing financial institutions in the matter. Banks will get a chance to defend themselves before the commissioners, who will ultimately decide whether to issue penalties. Columnist Dario Celis reported earlier in El Financiero that banks had been notified.

Cofece could issue fines of as much as 10% of a company’s annual Mexican revenue if it finds the firm conspired to manipulate the bond market. At the beginning of the probe, banks that were market makers during the period in question were subpoenaed by authorities.

Mexico’s monopoly-busting Cofece, led by Alejandra Palacios, faced criticism from Mexican financial authorities for targeting banks. It is the regulator’s most sweeping investigation of financial markets, which are usually policed by Mexico’s banking and securities regulator CNBV.

The case covers the types of alleged collusion that have cost major banks billions of dollars in fines in other markets. At least one bank sought protection as a whistleblower, people familiar with the matter have said.

Last November, CNBV fined six global banks, two brokers and a group of traders a total of around 17.6 million pesos ($900,000) for violating the country’s securities law on volume manipulation, according to the regulator’s database. CNBV launched its investigation after Cofece announced in April 2017 that it had begun a probe.

Late last month, a U.S. district judge threw out a suit by pension funds against 10 global banks for allegedly manipulating the Mexican bond market. The suit was filed because the Cofece probe came to light, providing the foundation of the pension fund’s case.