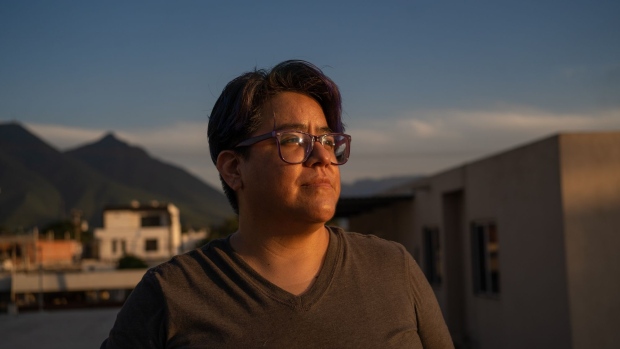 (Bloomberg) -- In a calm residential neighborhood, 15 minutes from the center of Monterrey, Mexico, on the second floor of their house, Sandra Cardona and Vanessa Jimenez created an abortion sanctuary.

They call it La Aborteria, or the abortion house: a repurposed room with a kitchen and bathroom, decorated with signs in Spanish that read, “Having an abortion is also an act of love,” and “Being able to chose makes us free.”  There, women are provided with a safe space to undergo a medical abortion.Cardona and Jimenez are part of a network called Necesito Abortar Mexico, established six years ago to  help Mexican women through the process of medically induced abortions. But these days, they often find themselves providing sanctuary to women from the US, many from Texas, where  a law banning abortions around the sixth week of pregnancy went into effect in September. Before the legislation, the network might have heard from one or two Texans a year, now Jimenez says she helps about five women a week get medical abortions.

“Before, when thinking about abortion, people in Mexico would say if anyone wants an abortion it’s better to go to Texas, and people would travel to the Texan abortion clinics,” said Jimenez. “And now what is so strange to me is how it has flipped. I think no one ever imagined that was going to happen in the US, and that now Mexico is the country providing that support.”

Demand for such services could explode, advocates say, with the US Supreme Court likely to reverse Roe v. Wade, the landmark 1973 decision that legalized abortion nationwide. About 26 states are “certain or likely” to ban abortion if the precedent is overturned, which will force many people to travel lengthy distances for treatment, according to the Guttmacher Institute, a nonprofit organization that does research and policy analysis on reproductive rights.

Jimenez and Cardona are among more than 50 women whose networks provide abortion care across Mexico. They are working with several volunteer groups to create a cross-border network from the West in Baja California, to the East in Tamaulipas, to meet the growing demand from Texas. Members from other networks have said they’ve also seen requests from Ohio, Oklahoma and Michigan.

They call themselves acompanantes, or companions, who provide information, assistance and support throughout the process. Most of these groups function as nonprofits and are staffed by volunteers. Cardona says her network is funded through donations and offers free abortions. She estimates that each of her 17 volunteers helps 50 to 160 women a month.

Even as American abortion opponents worked to chip away at the freedoms granted in the Roe decision, the US was seen as a bastion of reproductive rights by its southern neighbor. In Mexico, abortion advocates worked for years to dismantle a legal system that allowed states to criminalize the procedure, which led to harrowing stories of imprisoned women. A Mexican Supreme Court decision in September put an end to that, ruling that criminalizing abortion is unconstitutional a mere seven days after Texas’ ban went into effect.

The Mexican abortion networks have become so prominent that a delegation of US state lawmakers, including Texas Representative Erin Zwiener and Arizona Senator Stephanie Stahl Hamilton, traveled to Mexico at the end of May to learn more about their operations.

“I absolutely expect we will continue to have Texas women travel to Mexico,” said Zwiener in a phone interview. “One thing we know historically is that people who don’t want be pregnant will seek abortion care, and they will risk breaking the law, and they will risk their health to seek it.”

Given the recent surge in demand from the US, Cardona and Jimenez’s group established another recourse: an underground, cross-border abortion pill network. For women in the US who can’t travel, volunteers from Mexico will bring the medicine to counterparts in the US, who will then deliver it to the women in need.

Besides the restriction on abortions in the state itself, Texas also bars the mailing of abortion medications to residents. Governor Greg Abbott signed that law on Sept. 17, almost two weeks after abortion was decriminalized in Mexico and less than three weeks after Texas’ abortion ban went into effect.

Americans, especially those living close to the border, have been crossing into Mexico for medical treatment for years. Procedures ranging from cosmetic to dental surgery and prescription drugs are often much cheaper in Mexico than the US. Even women in California, where abortion is legal, travel to Tijuana, Mexico, in search of cheaper abortion care, says Luisa Garcia, the director of Profem, an abortion clinic in Tijuana, where they treat about 6 American women a month.The most common method of medical abortion is by mixing two drugs: mifepristone and misoprostol. Mifepristone blocks progesterone, a hormone that helps grow the uterine lining, where an embryo would typically implant, and misoprostol causes the uterus to empty. When combined, the medications work more than 95% of the time in ending a pregnancy up to 10 weeks of gestation. Mifepristone requires a doctor’s prescription, but Misoprostol can be found over the counter in Mexico.  Misoprostol can be used alone to induce an abortion, though it's less effective than the combination.

Miso, as Jimenez refers to the medicine, costs 700 Mexican pesos, or around $35, according to non-profit Ipas Mexico. In 2014, the average cost of abortion medicine in the US was $535, according to a study published in the Women’s Health Issues journal. Jimenez estimates their counterpart in the US helps around 15 women a week by providing an abortion kit that includes nausea medication, relaxation tea and ibuprofen.

“They don’t just send them the pills, they put together a whole care package,” she said. This helps the women “carry out their abortions in peace.”

Even after Mexico’s top court decriminalized early-term abortion, legislation still varies by state as each region works to update its laws. The border state of Baja California recently passed legislation to completely decriminalize abortion during the first 12 weeks of pregnancy, but in the bordering states of Sonora, Chihuahua, and Tamaulipas abortion is still illegal.

In Nuevo Leon, where Cardona and Jimenez have set up La Aborteria, abortion is only legal in the case of incest, rape, or when the mother’s life is at risk. Most of the women they help come to them just to pick up the medication. The ones who do carry out their abortions at the Aborteria are often people in vulnerable situations who don’t have a safe space to do so elsewhere. Nuevo Leon, like all Mexican states, will eventually have to decriminalize some form of abortion.

Crossing into Mexico can be an easy proposition for many Texan women. Nuevo Leon is close to the border towns of McAllen and Laredo, and a drive or bus trip from either to Monterrey clocks in at under three hours. Dallas and Houston each have about five flights a day to Monterrey, typically costing about $300 round trip.

Those options often make visiting Mexico more affordable than traveling to another US state, Jimenez said.

“When they finally get here, these women feel relieved,” Jimenez said. “They come from a place where abortion is restricted so when they can finally find a solution they feel relief that they are going to get this resolved.”

Veronica Cruz, the founder of nonprofit Las Libres based in Guanajuato, Mexico, and one of the leading figures in the feminist movement in Mexico, said that since January her organization has worked directly with 200 women and has sent more than 1,000 pills to the US.

“It’s a combination of the US becoming more restrictive in certain areas and it’s also about more and more women finding out that this is an option, an alternative, and an opportunity,” Cruz said.