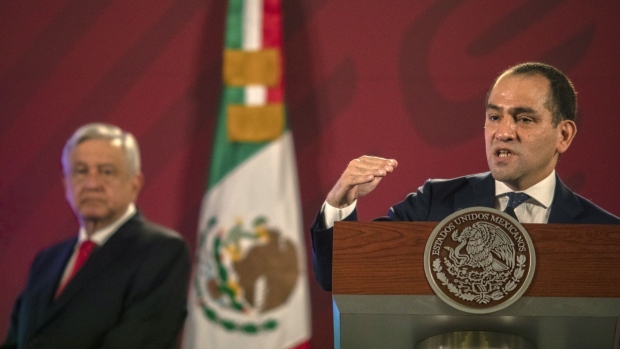 (Bloomberg) -- Even while railing daily against big companies and business elites, Mexico’s president has for three years looked askance at policies that might upset financial markets or hurt his beloved peso.

The markets took umbrage, knocking down the peso as much as 1.8% right after the surprise announcement and making it the worst performing emerging market currency in the past five days apart from Turkey, where President Recep Tayyip Erdogan has declared “an economic war of independence” against higher interest rates, forcing the hand of the central bank.

Analysts worried aloud that by helming the bank with Rodriguez, Lopez Obrador might be also taking a grab at the independence of one of the few Mexican institutions that has remained isolated from his controlling political clout.

“We’re in a pessimistic situation,” said Gabriela Siller, director of economic analysis at Banco BASE. “One fears a possible Erdoganization of monetary policy in Mexico.”

AMLO, as the president is commonly known, promptly dismissed such fears, saying twice that he won’t meddle with Banxico’s independence. Instead, he argued that he wanted to promote a woman who has been central to carrying out his sweeping austerity. In a statement to Bloomberg News, presidential spokesman Jesus Ramirez said the government will respect the central bank’s autonomy and “doesn’t plan to change its mandate or structure.”

Still, the move, which will put Rodriguez at the head of the bank until the end of 2027, hints at a growing tendency to throw aside caution in a mission to make a lasting mark on all aspects of Mexican public life. Even the peso, which the president often points to as a measure of his success, doesn’t seem to be holding him back.

Lopez Obrador, who has centralized government tightly around the presidency, has recently been pushing a nationalist electricity bill that would tear up private contracts and gut independent regulators even against the pleas of industry groups and the U.S. government.

The president had already raised eyebrows earlier this year by saying he wanted someone focused on the “moral economy” to run Banxico, as the central bank is known, which has been seen as a bulwark of stability for Mexican markets for three decades. He then unsuccessfully sought to pay down public debt with a central bank reserve windfall from the International Monetary Fund.

“Former Finance Minister Arturo Herrera had a profile more in favor of the free market, and that gave a great deal of tranquility to the private sector,” said Janneth Quiroz Zamora, vice president of economic analysis at Monex. “One of the big fears with this decision is that the president will interfere with the decisions of the central bank.”

Economists have begun desperately searching for comments made by Rodriguez on monetary policy -- any sign at all about where she stands on inflation -- and come up empty handed, in part because her expertise is in public finance.

“Her trajectory is atypical. All of the people who have led the board since the 1960s formed part of the central bank, including the current governor, Alejandro Diaz de Leon,” said Gustavo Del Angel Mobarak, an economic historian at Mexico City-based CIDE, a research center. “It’s not strange that the president would pick someone who is loyal to him, but it is strange that she doesn’t have the right experience to lead a major central bank.”

According to her resume distributed by the Finance Ministry, Rodriguez took classes toward a master’s degree in economy, but a ministry spokesman didn’t confirm if she finished the degree. While a master’s isn’t per se a requirement for the job, that’s uncommon for the leader of an institution that has prided itself on having staffers trained at elite U.S. universities.

Del Angel said she is known by people who have worked with her as being “competent” and “a workaholic.” Central bank Deputy Governor Gerardo Esquivel told Bloomberg she’s been an “effective and committed public servant since 2000.”

Mexico’s Finance Ministry didn’t respond to a request for comment. In her only public comments since the nomination, Rodriguez said Wednesday she is committed to defending the central bank’s charter.

Reading the tea leaves to understand what prompted Herrera’s sudden replacement is no easy task. While he also had never worked in monetary policy, as finance minister he spent the last two years meeting regularly with investors and attending the bank’s board meetings in a non-voting capacity. He was also seen as a loyal operator to a president who likes to concentrate all key decisions.

Whatever the reasons -- and business circles in Mexico are filled with gossip on the case -- Rodriguez will take over a bank facing extraordinary challenges if the government-controlled senate approves her nomination, as expected. Four successive interest rate hikes have failed to quell inflation, which hit a 20-year high of 7.1% in early November, suggesting Banxico will continue tightening.

When the pandemic hit, the bank played the unorthodox role of sole provider of stimulus for the Mexican economy, chopping rates aggressively while Lopez Obrador declined to dish out any significant government spending. Now, the nascent economic rebound has been halted, with a contraction in the last quarter, just as the bank has to tackle climbing prices.

In place of a seasoned hand on the tiller, investors are left placing their faith in the employees that make up the institution.

“The solid staff in Banxico, and a board that has gained experience in the last three years, should appease some of the most important concerns,” JPMorgan Chase & Co. economist Gabriel Lozano wrote in a note.