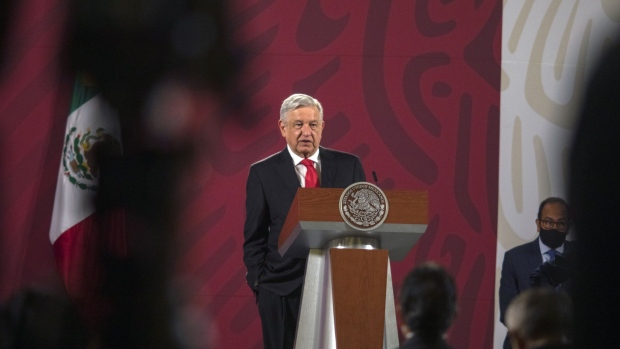 (Bloomberg) -- A week ago, Mexican President Andres Manuel Lopez Obrador was on a roll with his anti-corruption campaign, boosted by a video of rivals counting piles of cash and leaked testimony that could bring down more opponents.

Now, Lopez Obrador finds himself in a fight to regain his own integrity as a crusader against graft.

Two videos surfaced Thursday showing his brother taking packets of cash from a state political operator in 2015 -- three years before the president was elected. Over the weekend, two recordings that were leaked earlier made their rounds in social media, implicating the leader’s allies in illegal financing antics.

For a populist president who’s used a widening corruption probe into past administrations to boost his Morena party ahead of legislative and state elections next year, these developments have now left him playing defense in a week of what he described as unprecedented political drama and head-turning accusations.

“This is creating a moral threat,” said Luis Ugalde, who was head of the country’s electoral institute when he oversaw the leader’s narrow defeat in the 2006 presidential race. “This threatens to blow out Lopez Obrador’s narrative that he’s different.”

The allegations are splitting along party lines, with supporters battling the president’s critics as they call for prosecution given the explosive nature of the scandals. How Lopez Obrador handles the case will weigh on his party’s prospects of holding onto a majority in the lower house of congress with the elections next year.

In a video address Saturday, the president, known by his initials AMLO, called for an investigation into his brother and the political operator named David Leon. He said there’s a clear difference between his “people’s movement” and what he said was the crony capitalism of the past administration that has wrecked Mexico.

“That is corruption, the other is donations,” the president said. “I have come out of slander unharmed in the past. We are going to keep insisting on cleaning the country of corruption.”

The address was his second attempt in two straight days to defend the videos of his brother Pio Lopez Obrador.

On Friday, he also called the cash packets honest donations from individuals supporting his revolutionary movement. The cash in the video was used to fund costs such as gasoline for his Morena party, the president said. His movement had been funded by the people, he said, not through illegal sources used by other parties, he said.

While political donations are legal, they have to be registered, according to Mexican electoral law. Former election commissioners said protocols were broken when the political operative handed over cash to AMLO’s brother. The cash drop shared the same traits of the illegal financing commonly used by Mexico’s parties, they said.

The president’s spokesman and a top Morena official didn’t respond to a request for documents to show the donations were legally registered.

Leon, the operator who gave the president’s brother the funds in the videos, worked for Manuel Velasco, the governor of the southern state of Chiapas at the time. Velasco, a member of the Green Party, broke from the former ruling coalition to support AMLO. Leon has said the funds were donations to the party.

Both Ugalde and Benito Nacif, a former election commissioner who focused on party financing, said the videos raised the suspicion that Velasco may have funneled government funds into AMLO’s party, and that merited an investigation.

Velasco, now a senator who formally allied with AMLO’s Morena in June, denied he had funded any political movements. Like AMLO, he also said he welcomed a probe.

Mexico’s conservative National Action Party, whose lawmakers were named in the leaked testimony for taking bribes, filed a complaint to the electoral commission against Morena, the president’s brother and Leon. PAN legislators also plans to file a criminal complaint with the Attorney General’s Office for what it called a “serious crime,” according to a statement posted the party’s website on Sunday.

“Mr. President, we ask that your words be congruent with your actions,” PAN leader Marko Cortes said in the statement. “That is why we ask you to abide by the law both when it comes to members of your family, as well as members of your government and your party.”

Before the latest turn of events, AMLO used his press briefing on Monday to show a four-minute YouTube footage of senate officials from the previous administration seen counting cash stuffed in a duffel bag, calling it evidence of the “filth” of his predecessor’s regime.

Two days later, the 63-page leaked document purported to be a testimony by Emilio Lozoya, a former chief of state-owned oil company Pemex who’s cooperating with prosecutors, emerged. The leaked testimony alleged that three former presidents, two presidential contenders that vied against AMLO, and a dozen more people including ex-ministers and legislators, two of whom are now governors, were guilty of bribery.

AMLO repeated some of the allegations against his rivals during his 30-minute address on Saturday from the national palace as his brother’s video threatened to overshadow earlier events of the week.

For Nacif, AMLO’s Morena party has failed to provide evidence that the donations were properly recorded. Accepting donations of unknown origin carries the same penalty as taking funds from prohibited sources, like companies, the former election commissioner said.

The move to go after his rivals this past week departed from the president’s earlier stance to not dwell on corruption of past leaders. The reversal came as his popularity dipped with a record number of violent homicides and the collapse of the economy from the coronavirus pandemic that has left Mexico with the world’s third-highest number of deaths.

“He decided to open the sewer, and now all this is coming out,” Nacif said. “This falls out from using corruption as a political tool instead of building a strategy to eradicate it.”