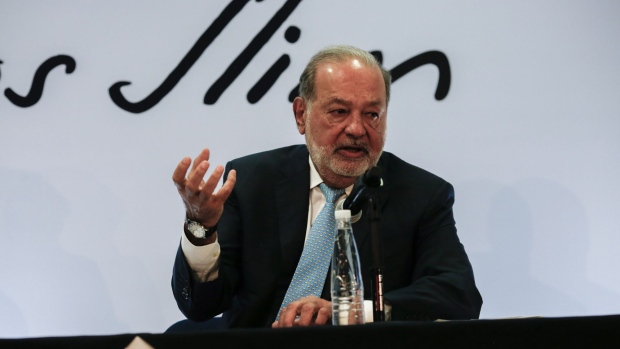 Carlos Slim, chairman emeritus of America Movil SAB, speaks during a press conference in Mexico City, Mexico, on Monday, April 16, 2018. Slim said that Mexico has plenty of advantages in the NAFTA negotiations. , Bloomberg

(Bloomberg) -- Commissioners at Mexico’s telecom regulator voted 3-2 against a project that proposed to deny a pay-TV license to billionaire Carlos Slim’s Claro, according to people familiar with the situation.

The vote means the project will have to go back to the units at the regulator studying the case, three people said, asking not to be named because the information isn’t yet public.

The three commissioners who voted against the project denying the license aren’t necessarily in favor of granting it, two people said, but think the project needs to be strengthened in legal terms so it doesn’t get bogged down in courts.

That means America Movil’s much-coveted license won’t be granted, at least for the time being. The carrier was declared a preponderant market player in 2014 by the IFT and banned from offering additional services such as TV. Its fixed phone line unit Telmex was also banned from offering TV when it received its original concession in 1990. But Claro TV, the unit that made the new request, didn’t yet exist when that decision was made.

U.S. Trade Representative officials raised concerns about fair competition in Mexico’s telecom sector earlier this month, a USTR spokesman told Bloomberg News. Those concerns were related to America Movil’s request for a license. In a rare press conference on Tuesday, Chief Executive Officer Daniel Hajj said the company would reach out to the USTR to talk about their concerns. “We’ll ask them to take a look at telecom prices in the U.S. and compare them to Mexico,” he said.

Hajj and Chairman Carlos Slim Domit said the company planned to invest 8 billion pesos ($387 million) if the license were to be granted.

America Movil and the regulator declined to comment on Wednesday’s vote.

(Updates details of the vote and adds additional info from third paragraph on.)