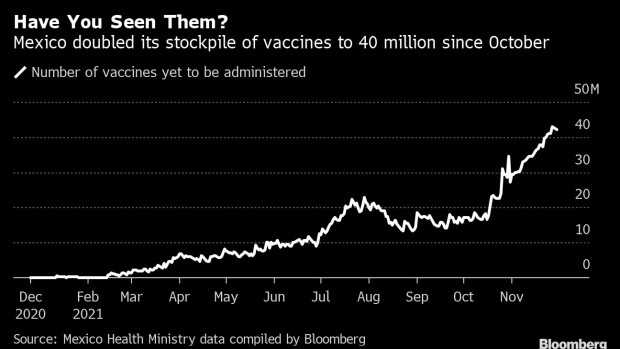 (Bloomberg) -- Mexico’s Covid-19 vaccine stockpile has doubled in the past six weeks to over 40 million unused shots, while the nation’s inoculation rate lags most regional peers and the omicron variant looms.

Mexico administered 132.4 million doses as of November 29, according to Health Ministry data, while the number of imported and locally produced shots reached about 174.6 million on the same day.

The growing storage of vaccines isn’t helping the nation catch up to Latin American peers. Mexico has fully vaccinated about 51% of its population, far below countries like Chile and Brazil, which are already giving out booster shots. Mexico was the first Latin American country to administer a vaccine back in Dec. 2020.

Mexico President Andres Manuel Lopez Obrador has said his priority is getting vaccines to adults in far-flung villages, and only recently broadening the campaign to teenagers 15 and older. His administration has denied any reports of lost or spoiled doses.

Lopez Obrador said Tuesday that Mexico will soon provide boosters to teachers and the elderly.