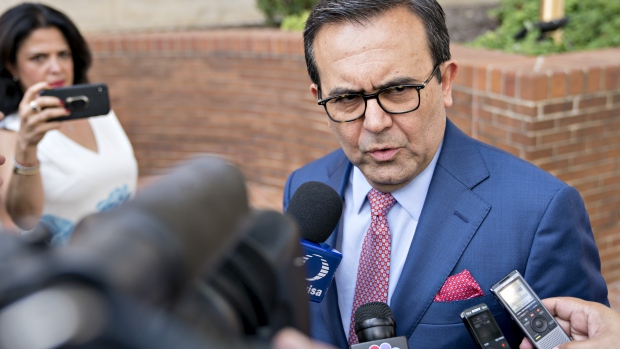 Ildefonso Guajardo Villarreal, Mexico's secretary of economy, speaks to members of the media while arriving for a meeting at the office of the U.S. Trade Representative in Washington, D.C., U.S., on Thursday, July 26, 2018. , Andrew Harrer/Bloomberg

U.S. and Mexican negotiators met in Washington again on Thursday to narrow their differences over auto rules of origin and other issues to modernize the North American Free Trade Agreement, said Mexican Economy Minister Ildefonso Guajardo.

“We are coming into a new meeting with a lot of work done through the night and reviewing if we are solving some of the remaining issues,” Guajardo told reporters as he entered the U.S. Trade Representative’s Office in Washington on Thursday morning. The minister, who also spoke to journalists after meetings on Wednesday, is spearheading talks for his country.

NAFTA negotiators are meeting for the third straight week as the U.S. and Mexico push for a deal on regional content requirements for car production and a list of other contentious issues. Canada hasn’t been at the negotiating table in the past weeks, as the U.S. and Mexico have focused talks largely on their proposals for toughening auto content rules.

When asked whether negotiations next week would include Canada, Guajardo said, “hopefully” once the U.S. and Mexico advance their talks.

--With assistance from Eric Martin