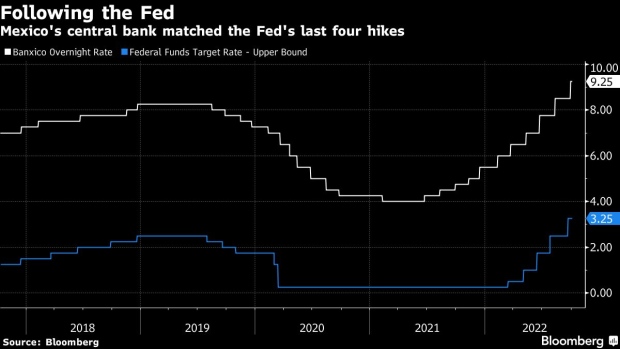 (Bloomberg) -- Mexico and Chile showed signs of peaking headline inflation last month as policy makers from both nations weigh how much longer to hike interest rates.

Official data published on Friday showed Mexico’s consumer prices rose 8.7% from a year earlier, unchanged from August and below the 8.75% median estimate of economists surveyed by Bloomberg. Chile’s annual inflation eased to 13.7% from 14.1%, marking the first slowdown since early last year.

Policy makers in Mexico and Chile are extending borrowing cost hikes in response to the highest inflation prints in decades. Central banks are getting help from a recent drop in some raw material costs, coupled with sub-par economic growth and government efforts to help tame consumer prices. Still, policy makers have flagged risks of more persistent cost-of-living increases.

“Lower-than-expected headline inflation in September is a welcome surprise for Mexican policy makers, but provides little relief with core prices still on the rise. Upward pressure on Chilean prices remained high in September, but started to moderate. We believe inflation peaked in the third quarter in both countries.”

Mexico’s core inflation, which excludes volatile items such as fuel, rose 8.28% in September from the same period a year earlier, up from 8.05% in August.

“Energy prices explain inflation being lower than what was expected in the month,” said Janneth Quiroz Zamora, vice president of economic research at Monex Casa de Bolsa. “Despite that, core inflation kept rising.”

Banxico delivered its 11th straight rate hike last month to 9.25%, the highest since it started targeting inflation in 2008. The 75 basis-point increase continued its run of matching the US Federal Reserve’s increases, but the five-member board said its moves would be data dependent going forward.

Finance Minister Rogelio Ramirez de la O said Monday the government would pause exports of goods including white corn, beans and sardines, under a pact with big businesses to try to tame inflation.

In Chile, transportation costs fell 0.2% in September, providing relief after surges of 1.6% and 3.4%, respectively, in the prior two months. The core price index rose 0.4% but the underlying trend is stabilizing, according to Andres Abadia, chief Latin America economist at Pantheon Macroeconomics.

Food and non-alcoholic beverages jumped 2.3%, representing the biggest driver on the month. Going forward, food prices will post smaller rises and even declines, reflecting global trends, according to a report from Bice Inversiones.

Chile remains track for its 11th straight rate increase next week as inflation represents one of the biggest headaches for President Gabriel Boric’s administration.

Policy makers in the South American nation have gotten help from tighter fiscal policy. The government is cutting expenditures by roughly 24% this year compared to 2021 and has proposed a spending increase of 4.2% for 2023.

Despite the efforts of the government and the central banks’ tightening cycles, inflation is still far from returning to target in both countries, meaning that policy makers won’t deviate from their hawkish stance soon.

Meanwhile, Mexico will do what it takes to tame inflation and hasn’t reached the end of borrowing cost hikes, its central bank President Victoria Rodriguez said in a local radio interview on Sept. 30.