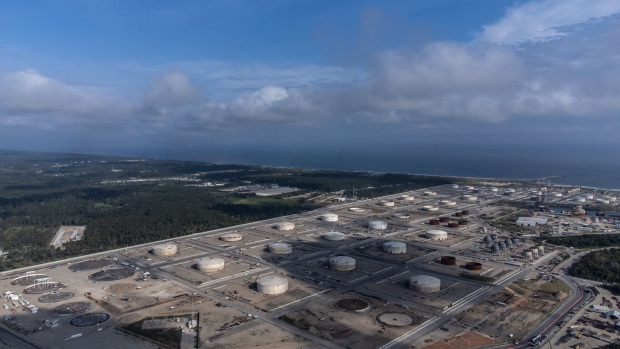 (Bloomberg) -- The site of Mexico’s newest oil refinery looks more like a tech campus than a place where dirty crude is processed into gasoline and diesel.

The only thing missing? The whir of refining equipment. Though the plant officially opened Friday in a ceremony attended by the president himself, the units designed to distill oil into gasoline stood quiet and idle next to construction equipment that suggested there’s still more work to be done.

“We're getting ready to stop importing gasoline, diesel and jet fuel, in order to be self-sufficient, create employment in the country, and direct these fuels at the internal market and national development,” said AMLO, as the president is known, flanked by Energy Minister Rocio Nahle and Petroleos Mexicanos Chief Executive Officer Octavio Romero Oropeza.

Friday’s ceremony, which started hours late, was an opportunity for AMLO to boast about the merits of oil refining during an era when much of the world is focusing more on the transition to clean energy.

“We ignored the sirens' song, the voices that predicted, in good faith, perhaps, the end of the oil age and the massive arrival of electric cars and renewable energies,” he said.

Dos Bocas, Mexico’s seventh refinery, is key to the government’s ambitions to end reliance on imported fuel and become energy independent. It’s poised to be the largest fuel plant in Mexico when it eventually starts up operations — likely sometime next year — with the potential to increase the country’s oil-processing capacity by 20%.

And it’s supposed to bolster the local economy of Paraiso, in the president’s home state of Tabasco.

“This is a moment of big change, a major turn, from selling crude oil to transforming the raw material, producing the fuel ourselves, and selling it on the internal market," AMLO said.

But critics question whether the construction of the Dos Bocas plant, officially called Olmeca, will truly further AMLO’s lofty goals. The project has been beset by construction delays and cost overruns so massive they prompted the resignation of a high-profile Pemex official in December.

Initially expected to cost $8 billion when it was proposed in 2019, the refinery’s budget for construction work through 2024 rose to more than $14 billion in May, with the final price tag likely totaling between $16 billion and $18 billion, according to people familiar with the matter.

What’s more, the plant isn’t expected to start producing fuel commercially for months, at least. And cash-strapped Pemex has a track record of failing to invest in its refining business, resulting in maintenance problems, accidents and financial losses to the company.

AMLO, who’s maintained that the project’s costs had only risen 20%-30%, said Friday that the new plant will enable Mexico to raise it's refining output to 1.2 million barrels of crude processing per day next year.