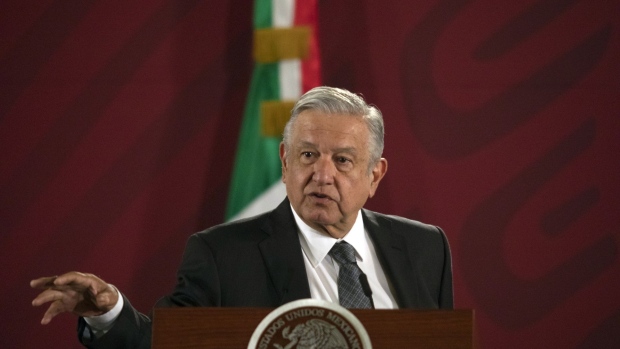 (Bloomberg) -- Mexican President Andres Manuel Lopez Obrador’s relationship with the country’s business elite is rapidly deteriorating over the response to coronavirus and his decision to back a popular vote to shutter a partly built $1.5 billion beer plant just as the economy is on the edge of a precipice.

On Monday, Lopez Obrador backed a weekend public consultation where the population of Mexicali, in northern Mexico bordering the U.S., voted in favor to revoke licenses from a Constellation Brands Inc.’s brewery. The president justified the cancellation saying he needs to “listen to the people” even if the participation on the vote was just under 5% of registered voters.

Business leaders condemned the decision as a self-inflicted wound that would deter investments into Mexico amid a global market rout that has sunk the peso to a record low. The CCE, the country’s top business lobby group, slammed the government’s position in its harshest language used yet against the Lopez Obrador administration.

“The signal that Mexico sends to the world is that the law is not respected here, and that there is no guarantee whatsoever for those seeking to invest, generate employment and development in our country,” the CCE said in a statement.

The relationship between AMLO, as the president is known, and Mexico’s business community was always meant to be complicated even with efforts from both parts to strike a conciliatory tone. A populist who spent all his political career decrying the rich and powerful, AMLO won in a landslide election on a promise to break up crony capitalism and put Mexico’s poor first while keeping Mexico’s pro-business stance.

Yet the harsh rebuttal used by the business group led by Carlos Salazar, who had become one of the main intermediaries between business leaders and AMLO, marks a potential fracture to the entente seen in the first 16 months of the new government.

The plant cancellation adds to a pattern of putting the president’s political ends over property rights, even it if means the economy may suffer. AMLO got off to a rocky start by canceling a $13 billion partly built airport even before taking power in December 2018. Then he challenged private sector gas pipeline projects. His government said it could cut subsidies from private solar and wind parks.

“Just when you think the Mexican president is ready to make the right decisions for the long-term prosperity of the Mexican people, he shows you how incredibly stubborn he can be,” said Duncan Wood, director of the Wilson Center’s Mexico Institute in Washington.

“The spillover effect of the Constellation Brands project is going to be huge,” Wood said. “This is just gonna frighten investors even more than they have been already.”

Lopez Obrador’s press office didn’t reply to a request for comment on this article. On Wednesday, Lopez Obrador suggested there could have been wrongdoing involved in permits for the beer factory, adding that he was not concerned about driving off investment.

AMLO has also been criticized recently by business leaders over his handling of the coronavirus crisis and his refusal to implement stimulus plans to tame a plunging economy, just when governments around the world rush to shore up confidence amid the virus outbreak.

Mexico is facing the risk of widespread bankruptcies amid small and medium sized firms if it doesn’t offer a more robust plan to support companies as parts of the economy shut down due to the outbreak, said a former top government official from the previous administration who now represents the private sector. He requested anonymity in order not to disrupt talks with the government.

The economy is now seen shrinking 3% this year after a small contraction in 2019, with some analysts warning that the slump could mirror that of the Tequila crisis in the mid-90s.

Instead of a coordinated response from his officials as seen in Chile, the business community was greeted with a lecture on Monday morning from Lopez Obrador about how there would be no bailouts or tax forgiveness for the private sector during this crisis, as Mexico’s previous “neoliberal” governments had done.

“They want us to throw around spending like in the past. Every time there was an emergency: throw money. No, we have to take care of the budget,” Lopez Obrador said Wednesday, repeating his austerity stance. He did say he would offer low or no-interest loans to small businesses.

“We need coordination from authorities,” said Carlos Gonzalez, head of research at Mexican brokerage Monex. “What we have are disjointed actions.”