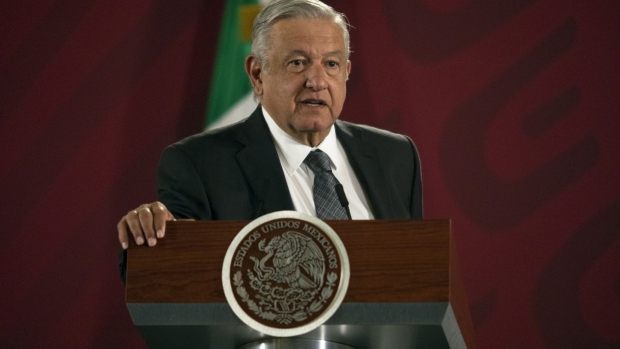 Andres Manuel Lopez Obrador, Mexico's president, speaks during a news conference at the National Palace in Mexico City, Mexico, on Tuesday, Jan. 7, 2020. Mexico's move to divert aTC Energy Corp.gas pipeline from indigenous lands is reigniting concerns over the future of energy projects in the country. , Bloomberg

Mexican President Andres Manuel Lopez Obrador said he’s infected with Covid-19 after the country posted record increases in cases and fatalities from the outbreak in the past week.

The president announced his diagnosis in a tweet, saying his symptoms are mild and that he’s receiving treatment. He’s also expected to stay on top of the country’s affairs, and will take a scheduled call with Russian leader Vladimir Putin on Monday.

“As always, I am optimistic,” he said. “We will all move forward.”

Lopez Obrador, known as AMLO, has generally held a laxed approach to the virus, refusing to impose mandatory lockdowns and pressing hard to keep the economy open for business. With the increase in the deaths in the past week, the nation now has the fourth-highest number of fatalities globally, after the U.S., Brazil and India.

AMLO on Friday held a telephone conversation with U.S. President Joe Biden in Monterrey after a short trip from Mexico City. The Mexican leader, who has refused to wear masks during the pandemic, was pictured during the call at a table next to his Foreign Affairs Minister Marcelo Ebrard and former Chief of Staff Alfonso Romo, both also without a mask.

As he resisted strict lockdowns, AMLO also pledged government austerity, has also declined to implement any large-scale stimulus amid the outbreak. Christmas celebrations are believed to have contributed to the outbreak, while the nation’s vaccination campaign has suffered delays.