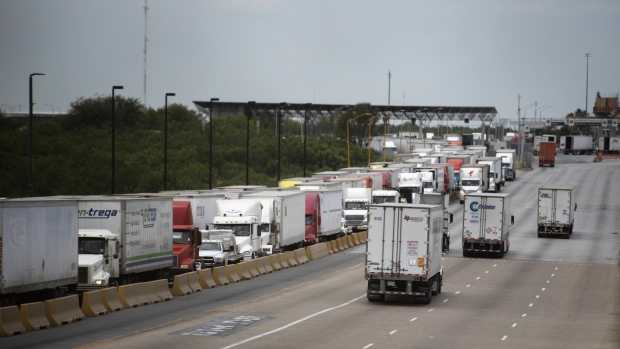 Trucks travel across the World Trade International Bridge in Laredo, Texas, U.S., on Monday, June 10, 2019. Texas, which accounts for more than a third of U.S. trade with Mexico, would be hardest hit by any tariffs on the country. , Bloomberg

Mexico’s Senate ratified a North American trade deal with the U.S. and Canada, becoming the first to do so amid a truce reached with President Donald Trump over an unrelated tariff threat.

The vote took place during a special session less than a month after President Andres Manuel Lopez Obrador sent the accord to the Senate. Lawmakers voted 114-4 to approve it, with three abstentions. The U.S.-Mexico-Canada agreement had been signed by leaders of the three nations in November and is awaiting legislative votes.

USMCA, as the deal is called, modernizes but doesn’t fundamentally change NAFTA. Trump had threatened to impose tariffs on all goods from Mexico if it doesn’t stop illegal border crossings, risking derailing the accord’s ratification earlier this month. But it’s back on track after Mexico struck a deal with him on migration and he dropped the threat, for now.

“No international accord is ideal,” Mexican Senator Hector Vasconcelos, who heads the foreign relations committee, said before the vote. “What’s important is that each participant finds advantages in them.”

Mexico had originally planned to ratify the USMCA in tandem with Canada and the U.S., but Lopez Obrador requested swift approval of the deal.

U.S. House Democrats, which hold a majority, are likely to seek changes to the deal before they approve it. U.S. Trade Representative Robert Lighthizer said Tuesday he’s committed to working with Democrats on changes.