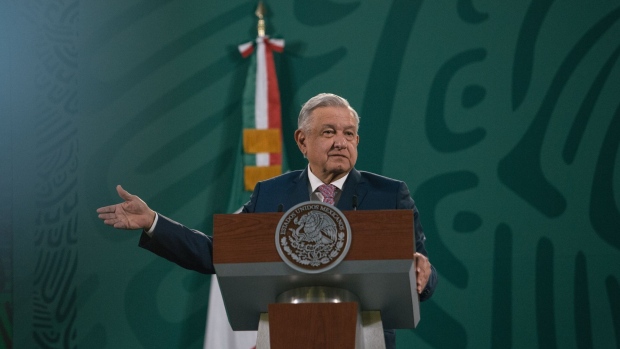 Andres Manuel Lopez Obrador, Mexico’s president, speaks during a news conference in Mexico City, Mexico, on Monday, Feb. 8, 2021. President Lopez Obrador reappeared at his daily press conference on Monday. On January 24 he announced he had Covid-19 and began a quarantine. , Bloomberg

(Bloomberg) -- Despite its name, it’s never been very clear what the Ecologist Green Party of Mexico stands for.

Since 2018, the Greens have been in coalition with a government that has hobbled the clean energy sector while plowing billions of dollars into the mega-polluting state oil company.

After Sunday’s midterms, the party founded in 1986 is set to hold the balance of power in congress, meaning President Andres Manuel Lopez Obrador will likely need its support to pass budgets and move forward his legislative agenda.

Lopez Obrador’s Morena Party and its close allies in the Labor Party will have a maximum of 244 seats in the 500-person chamber, according to projections by the electoral authority. Unless they make a surprise alliance with the opposition PRI or Movimiento Ciudadano groups, they will need the Greens’ 40 to 48 projected seats to pass legislation.

In the past two decades, the Greens have backed governments from three different parties with radically differing agendas. Between 2012 and 2018, that meant supporting President Enrique Pena Nieto’s drive to liberalize the energy sector. Now, it means propping up efforts by AMLO, as the Mexican leader is known, to undo those same reforms.

Environmentalists say the party’s priorities have little green about them. In 2009, the European Green Party withdrew its recognition of Mexico’s Greens in protest against their support for the death penalty.

“Throughout history this has been a party that has cheated the population--firstly by calling itself an ecologist party,” said Genaro Lozano, a political scientist at the Ibero-American University in Mexico City and TV commentator. “It is a family franchise and all that it does is sell itself to the best bidder. It’s an impostor party.”

Lopez Obrador’s administration has been lambasted by environmentalists for building an oil refinery on the site of a mangrove forest, promoting coal, causing widespread deforestation, and slashing the environment budget. During all that time, the Greens “said nothing,” said Gustavo Alanis, director of the Mexican Center for Environmental Law.

Read More: Energy Protectionism in Mexico Has Made Climate the Victim

Corruption allegations have swirled around the party for decades. Its then-leader was caught on tape in 2004 allegedly asking for a $2 million bribe. In 2016, hundreds of Mexican intellectuals called for the party to be disbanded for systemic corruption. Electoral authorities are now investigating whether the Greens hired influencers to illegally campaign for them on election day, El Financiero reported Thursday.

The Greens didn’t respond to requests for comment on this article.

A spokesman for the presidency said he had no comment on the matter beyond that there are no corruption cases open against the Green Party.

Rather than using its newfound power to push green policies, the party is likely to try to further entrench itself in Mexico’s political system by asking for a cabinet position or support for its state governorship candidates in 2024, Lozano said.

During the 2012 presidential race, Lopez Obrador himself complained about the party’s dealings, saying it was only calling for the government to fund citizens’ medicine at private pharmacies because its founder’s family owned several pharmacy chains. In 2015, AMLO’s party unsuccessfully pushed for the election institute to ban Green candidates from standing in that year’s midterms over alleged violations of electoral law.

“Lopez Obrador’s discourse of a new public ethics, so often used against his political adversaries, isn’t applied to them,” he said. “It proves the saying: It’s easier to see a speck in the eye of another than the log in your own.”