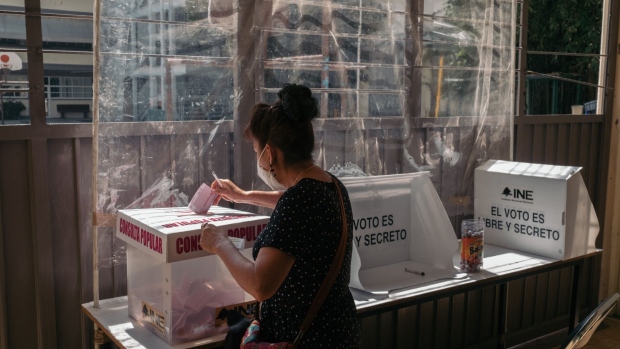 A voter casts a ballot at a polling location during a national referendum in Mexico City, Mexico, on Sunday, Aug. 1, 2021. In this referendum, President Andres Manuel Lopez Obrador is asking Mexicans to decide whether his five predecessors should be investigated for alleged wrongdoing, part of an effort to retain his anti-graft credentials and rally his support base, even though the vote's results are likely to be toothless. , Bloomberg

(Bloomberg) -- A nationwide referendum spearheaded by Andres Manuel Lopez Obrador to investigate his five predecessors came up far short of the turnout needed to make it legally binding, signaling a lack of urgency in the Mexican president’s key anti-corruption campaign.

Only 7% to 8% of eligible voters cast ballots Sunday, shy of the 40% needed for the referendum to force authorities to take action, the nation’s electoral agency estimated hours after the vote concluded. Of those who did show up, 89% to 96% agreed former leaders needed to come under scrutiny.

While the referendum was set up for a feeble outcome after the Supreme Court made the question far murkier than the original version, the low turnout could embolden opposition parties that have questioned the president’s priorities, including his anti-graft crusade.

Lopez Obrador, who is often called AMLO, said Monday that the referendum was an important exercise in participatory democracy. He noted that Sunday’s referendum had more participation than any other in the country’s history and said he expected far more turnout next year, in a national referendum on his presidency that asks whether voters want to remove him from office early.

“This practice is going to become a habit, a culture, and we’re going to pass it on to the new generations, for which reason I’m happy with yesterday’s results,” he said at a press briefing. “Regardless of whether it’s binding or not, it’s important that this democratic process moved forward so that nobody feels untouchable, or absolute, at any level of the ladder, and so that the people continue to be respected.”

AMLO proposed that legislators lower the 40% minimum and in the future change the required date to allow such questions to be included on the ballot on other election days, thereby reducing the cost. He said that he expected the electoral agency to set up more official polling stations in the next referendum.