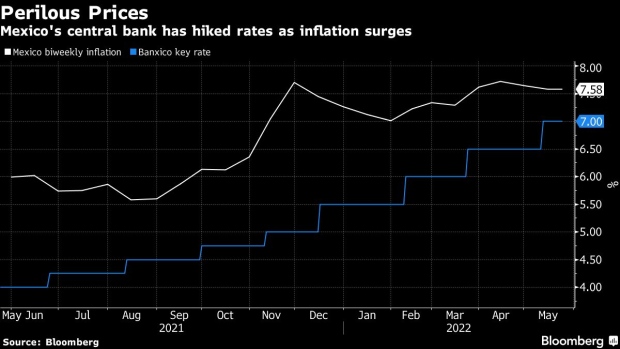 Lopez Obrador, known as AMLO, in early May struck a deal with major businesses to limit price increases on basic goods for six months in exchange for benefits including tariff relief. Inflation hit a two-decade high of 7.72% in early April, turning into an increasingly political problem for the government as Mexicans’ purchasing power diminishes.

The president has also used state energy giant Pemex’s windfall from high crude prices for subsidies to blunt the cost of rising fuel prices, which hurt his working class base. The subsidies have slowed inflation by two percentage points, Finance Minister Rogelio Ramirez de la O said at an event Tuesday, adding that if weren’t for the aid Mexico’s inflation would be at 9.7% or more.

Still, slowing Mexico’s sticky inflation rate will take time and the impact of the deal in practice is still to be seen. Price gains slowed only slightly to 7.58% in early May, the national statistics institute reported Tuesday, in the first inflation data published after the agreement.

“We believe the program is not going to be enough to contain inflation pressures” since inflation has become “quite generalized” across the economy and the deal won’t impact services costs, Diaz Loubet said.

The price pact overlaps with the central bank’s current monetary policy tightening cycle. Banxico, as the bank is known, has raised interest rates by 50 basis points in each of its last four meetings, and signaled this month it could accelerate tightening to an unprecedented 75 basis points in June.

In total, policy makers have raised borrowing costs by 300 basis points in nearly a year with eight straight hikes. Additional rate increases of 200 to 300 basis points may still be needed to get the rate into restrictive territory, Deputy Governor Jonathan Heath said earlier Tuesday.

The pact will likely help control inflation with short-term effects “on the margins,” but that “it is not the solution,” Heath said.