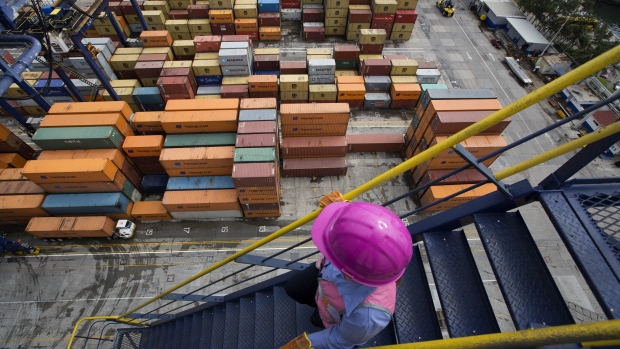 A worker walk down stairs as shipping containers sit stacked at the Port of Veracruz in Veracruz, Mexico. , Bloomberg

(Bloomberg) -- Mexico’s Senate has several concerns about the newly negotiated free trade agreement for North America, said the majority leader of the upper house that will be responsible for its ratification.

There are some "very delicate areas," Senator Ricardo Monreal said in an interview Wednesday about the new deal known as USMCA that’s still being studied in the senate.

The three-nation trade accord agreed to last year calls for changes to patent rules that could cause prices for medicines to rise, Monreal said. Other areas that have raised red flags include industrial property, national content and rules of origin, he said, declining to elaborate.

Mexico’s Senate doesn’t have a fixed timeline to vote on the new deal and will wait until the U.S. Congress is ready to approve it, said Monreal, who didn’t raise the possibility of scrapping the deal. Named by U.S. President Donald Trump as the U.S.-Mexico-Canada Agreement, the deal will replace the 1994 Nafta pact in the three countries, which trade $1 trillion annually. Talks for a Nafta refresh began in 2017 under threats by Trump that he’d quit Nafta if he didn’t get a better deal.

Monreal added in the interview that he doesn’t see support for a mining bill to be dealt with by the Senate in the spring session. Mining-union leader and newly installed Senator Napoleon Gomez Urrutia has said the industry should contribute more to government income and that he expects proposals will be discussed in the senate.

To contact the reporter on this story: Nacha Cattan in Mexico City at ncattan@bloomberg.net

To contact the editors responsible for this story: Vivianne Rodrigues at vrodrigues3@bloomberg.net, Robert Jameson