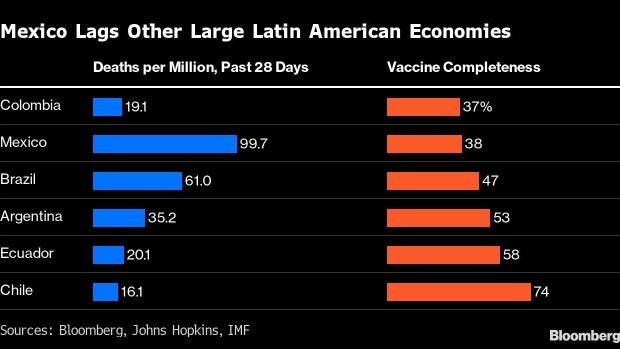 Maquiladora workers wait in line to receive second doses of the Pfizer-BioNTech COVID-19 Vaccine at a Lear Corp. factory in Ciudad Jurez, Chihuahua state, Mexico, on Tuesday August, 23, 2021. A total of 80.7 million Covid vaccine doses have now been administered in Mexico, according to data collected by Bloomberg News and Johns Hopkins University. , Bloomberg

(Bloomberg) -- Mexico was the first Latin American nation to administer a vaccine against Covid-19 last December and has received by far the most donations from the U.S. Yet it’s now fallen far behind regional peers in the inoculation battle.

Supply-chain woes and poor logistics have left Latin America’s second-largest economy with just 39% of the population fully vaccinated, well below Argentina and Brazil, according to Bloomberg’s Vaccine Tracker. Even Ecuador, which had barely 3% of its population vaccinated in May, is now way ahead at around 58%.

The number of doses administered in a day in Mexico peaked at 1.45 million in late July, and hasn’t come close since. The country, like many others, saw delays in shipments from Pfizer Inc. at the start of the year. Then there were supply-chain issues that slowed, by months, the local production of the Oxford-AstraZeneca Plc shot. But experts also point to inadequate planning.

“There’s a problem with highly inefficient distribution logistics,” said Arturo Erdely, a mathematician at UNAM University who has closely followed pandemic numbers and vaccine distribution. “They set up itinerant vaccination sites and people have to figure out when and where to go, but not everyone hears the radio or sees social media.”

Mexico has a strong vaccination history and little anti-vaccine sentiment like in the U.S., said Alejandro Macias, who oversaw Mexico’s fight against the H1N1 epidemic in 2009. But outside the big cities, coverage has been thin. Mexico City has inoculated 99% of eligible adults with at least one shot but a state like Chiapas has reached only a third of its population, according to government data.

“In some states, the delay is simply because vaccines haven’t arrived,” Macias said in an interview. “Vaccine distribution hasn’t been equal among states.”

The highly contagious delta variant hit Mexico hard over the summer. As cases hit records in mid-August, tourist spots like Cancun and Los Cabos shut beaches while hospitals grew crowded. In September, there were days with more than 1,000 deaths.

Last week, the country averaged 5,900 new cases and 470 deaths daily. Experts warn that low vaccination rates, even in select spots, steeply increase the risk of new waves and variants. Overall, Mexico has the fourth-highest fatality count from Covid globally with more than 282,000 deaths.

Covid inoculation began promisingly. As vaccines started materializing last year, Mexico scooped up more than 234 million doses from several companies. The largest contract by far was for 77.4 million doses from Oxford-AstraZeneca. With funding from the country’s wealthiest person, Carlos Slim, Mexican laboratory Liomont was to produce 150-200 million doses with ingredients flown in from Argentina. The plan was also to supply other Latin American countries.

Then came the delays that limited access to critical components and longer times to comply with the site qualifications for the release of the first batches. The government publicized every plane landing carrying vaccines but said little about delays in local production.

In May, then Finance Minister Arturo Herrera said the Liomont lab would produce 3 to 6 million vaccines per week -- meaning 66 to 132 million by now, and 55% were to remain in Mexico. So far, the lab has only produced 27.6 million. AstraZeneca has delivered another 20.4 million doses produced outside the country, bringing the total to about 48 million. In response to questions, AstraZeneca said it’s still on track.

“We have supplied the vaccine according to the terms agreed in the contract with the Mexican government for 77.4 million doses and are on track to deliver that commitment by the end of the year,” an AstraZeneca spokesperson said.

While Mexico wasn’t the only country affected by delays and low stock of shots, others found a way around those issues. Brazil produced both Sinovac Biotech Ltd. and AstraZeneca vaccines locally while countries like Chile and Uruguay leaned heavily on imported Chinese vaccines until mRNA shots were more widely available.

The federal government’s data on population covered by vaccines differs from Bloomberg’s tracker because they only take into account people over 18 years old.

“Using only adults for the denominator is tricky,” said Erdely. “Eventually, everyone needs to be vaccinated.”

The government hasn’t made vaccines available to people under 18 apart from those at high risk. The U.S. and some South American countries are vaccinating 12-17 year olds, while others have even started vaccinating 5-11 year olds.

Parents all over Mexico are filing injunctions in state courts to get their children vaccinated. One lawmaker said he has received 1,300 requests from parents.

On Tuesday, a judge in the state of Mexico ruled that everyone 12 and older must be made eligible. President Andres Manuel Lopez Obrador said his government will challenge the ruling.

In addition to all of Mexico’s woes in doling out shots, there’s a stockpile of about 16.5 million doses that the government says are waiting to be administered. Some conspiracy theorists even think they were stolen. Erdely says there’s been an accounting error.

“It’s most likely they made a mistake counting how many came in, how many they applied, and the numbers just don’t match,” he said. “I don’t think they’re lost or gone missing.”

As for boosters, Macias says Mexico doesn’t have enough vaccines at the moment to even have that conversation.

“We’re all going to need them at some point, but we’re nowhere near the point of offering them in Mexico,” he said.