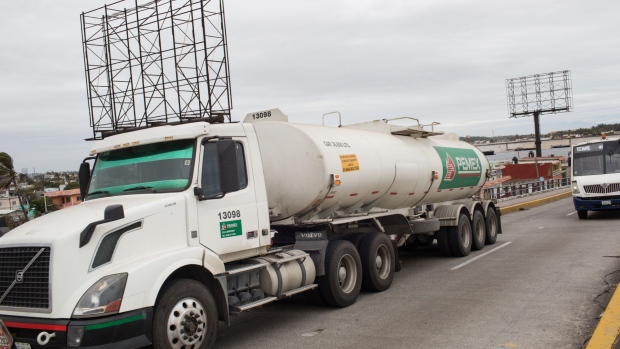 (Bloomberg) -- Mexico slashed the price for its flagship Maya crude, the latest producer to discount its cargoes as the coronavirus pandemic destroys fuel demand and Saudi Arabia floods the world with crude.

Petroleos Mexicanos’s trading arm PMI lowered its Maya crude differential into U.S. Gulf Coast by $2 to minus $10.05 a barrel for April, PMI said in an emailed statement. The so-called K factor is applied to benchmark crudes to adjust for market conditions. It’s the biggest discount since the company changed its formula for December. The company also cut pricing to Europe, India and the Middle East by the same amount.

Oil prices have been ravaged by the threat that the spread of coronavirus across the world may cause demand to collapse by as much as 20 million barrels a day as drivers stay home and flights are grounded. The plunge was exacerbated by a price war between Saudi Arabia and Russia that is adding more supply to an already swamped market.

While Maya is mostly sold in evergreen contracts that are renewed automatically with refiners, customers can nominate or defer volumes for a given month, depending on the K factor. The selling price of Maya also acts as an indicator for other heavy crude grades in Latin America and Canada because they compete for interest from U.S. Gulf Coast refiners.

Pemex, as the Mexican state driller is known, is among one of the most vulnerable producers as chaos ensues in global markets. Its debt is the highest of any oil major, at more than $100 billion, and its output has been declining for 15 years.

The company’s oil hedge -- which protects 234,000 barrels a day, about one-fifth of its oil exports, at $49 a barrel -- doesn’t resolve the problems it faces from the global price crash, its chief executive officer Octavio Romero Oropeza said earlier this week.

Brent crude, the global benchmark that along with West Texas Intermediate oil in Houston forms the pricing basis for Maya, is down more than 45% this month to around $27 a barrel. More than 80% of oil production by Pemex is unprofitable at a price below $35 a barrel, according to energy consultancy Wood Mackenzie Ltd. Mexico’s export mix fell to $17.70 on Thursday, according to Pemex data.