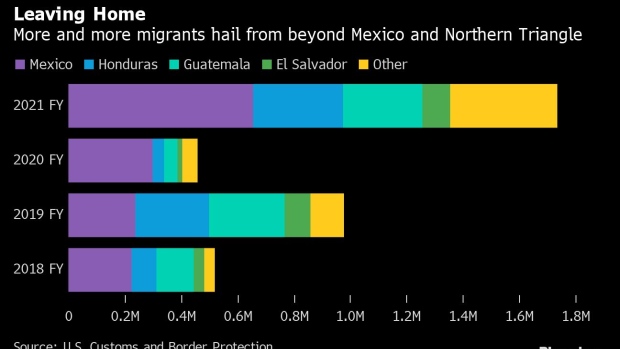 Travelers wearing protective masks board a Grupo Aeromxico aircraft at Benito Juarez International Airport (MEX) in Mexico City, Mexico, on Tuesday, May 25, 2021. Mexico's aviation-safety ranking has been downgraded by the U.S., prohibiting an expansion of flights from the nations carriers to its northern neighbor. Photographer: Luis Antonio Rojas/Bloomberg , Bloomberg

(Bloomberg) -- Mexico will require Brazilian tourists to obtain visas to enter the country as it tries to stem a surge of U.S.-bound migrants from across Latin America.

Mexico’s Foreign Ministry announced in a statement Friday that due to “increased flows of irregular” migration, the government would suspend a no-visa pact it’s held with Brazil since 2004. The accord between the two largest Latin American economies will be “temporarily” halted as of Dec. 11, it said.

“Sadly, criminal groups profit, through deception, from the interest of Brazilian nationals to migrate irregularly to the U.S.,” the ministry said.

The Biden administration is grappling with an unprecedented wave of migration on the U.S. southern border, with some 1.7 million people encountered trying to cross this year, according to U.S Customs and Border Protection.

The majority of migrants apprehended, almost 1.4 million, hailed from Mexico and the Northern Triangle in Central America. But the coronavirus and ensuing economic crash spurred hundreds of thousands of people, primarily from other nations in Latin America and the Caribbean, to leave their homes.

Unlike many Haitians and Cubans, who often start their journeys deep within South America and travel by land, migrants from Brazil typically fly to Mexico City before heading north.