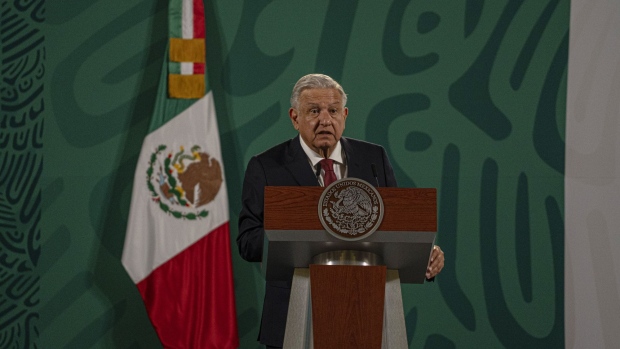 (Bloomberg) -- Mexico’s government will review a past promise made by state oil giant Petroleos Mexicanos to conserve a protected area on which it is now building a $10 billion oil refinery, according to President Andres Manuel Lopez Obrador.

Last week, Bloomberg News reported that in 2007 Pemex agreed to preserve the area for 20 years. Four environmental lawyers who examined the Pemex documents said the promise appeared to still be in effect.

The president said Tuesday during this daily news conference that Pemex could face a sanction over the promise, adding however that he suspected government experts would come to a different conclusion.

Read More: Pemex Is Building Refinery in Green Area It Promised to Protect

AMLO, as the president is known, said Energy Minister Rocio Nahle would look into the matter and answer any questions. “I promise that she will attend to you and give you the information,” he said in response to a question by Bloomberg News.

The files show that Pemex pledged in 2007 to protect an area that includes the site of the refinery and not to build new works there in exchange for the right to drill nearby. The area contains rare mangrove trees and 23 species of protected animals, according to the files.

The refinery in Lopez Obrador’s home state of Tabasco is central to the nationalist president’s mission of making Mexico self-sufficient in energy. The project has been roiled by delays, spiraling costs and the destruction of protected mangrove trees on the site.