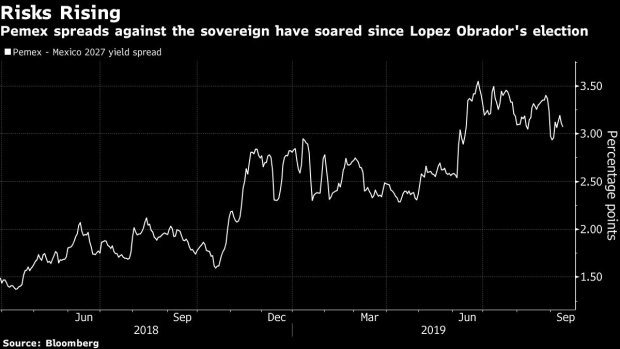 (Bloomberg) -- Mexico’s Finance Ministry isn’t considering an explicit guarantee on the bonds of state-owned Petroleos Mexicanos despite increasing costs of issuing them because it could hurt the country’s own debt standings, according to a top official.

Undersecretary Gabriel Yorio said on Thursday that although the step is sometimes requested by bondholders as a way of reassuring their investment, it could generate distortions in the trading of Pemex and government-issued debt. The yield investors demand to own Pemex’ bonds maturing in 2027 rather than sovereign debt has ballooned to more than 3.1 percentage points from about 1.5 a year ago despite the oil company being fully-controlled by the Mexican state.

Yet explicitly guaranteeing Pemex debt “isn’t something that we’re considering or have ever really considered,” Yorio said in an interview in his National Palace office in Mexico City. If Mexico did so, “why would someone buy sovereign debt if Pemex is paying a premium over sovereign risk? It would discourage buying sovereign debt. We saw this in a roadshow that we did in Europe.”

Pemex, the world’s most indebted oil company, is on Thursday selling bonds to refinance at least $5 billion of its more than $100 billion debt load. The embattled company is seeking to buy back short-term notes and replace them with bonds of longer maturity. Yorio said that the finance ministry would be happy if Pemex refinances $10 billion in notes in this transaction.

While markets have welcomed government support of almost $10 billion this year, including this week’s $5 billion capital infusion, some Pemex watchers and credit raters say that it’s not enough to move the needle. The company has a heavy tax burden and requires tens of billions of dollars in investment to reverse almost 15 years of production declines.

Mexico is working to prevent a potential downgrade in Pemex’s credit rating after Fitch Ratings Inc. cut it to junk and Moody’s Investors Service, which rates Pemex one step above high-yield, lowered its outlook to negative in June.

--With assistance from Justin Villamil and Carlos Manuel Rodriguez.

To contact the editor responsible for this story: Juan Pablo Spinetto at jspinetto@bloomberg.net