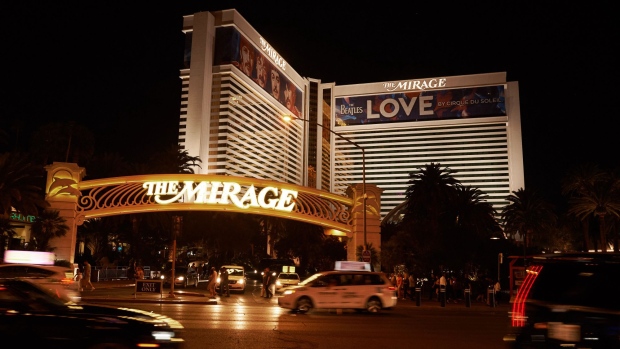 (Bloomberg) -- MGM Resorts International is putting the Mirage in Las Vegas up for sale, parting with a property known for its lava-spewing volcano and tiger attraction.

The company wants to reduce its exposure to the Las Vegas Strip and is unwilling to invest more in the aging property. It will begin seeking bids at a time when Las Vegas resorts have been fetching record prices.

“It’s at the center of the strip. It was built to last,” MGM Chief Executive Officer Bill Hornbuckle said on a call with investors Wednesday.  “But as we look at capital allocation and we looked at the notion of diversification. We have enough of Las Vegas.”

The Mirage, which opened in 1989 under the direction of casino magnate Steve Wynn, helped reinvigorate tourism in the city. Soon other operators began building large resorts with entertainment that only could be found in America’s gambling capital.

Las Vegas Sands Corp. agreed in March to sell its Venetian resort to Apollo Global Management Inc. in a $6.25 billion transaction. MGM itself is taking over management of the Cosmopolitan in Las Vegas, a luxury resort adjacent to some of its other properties.