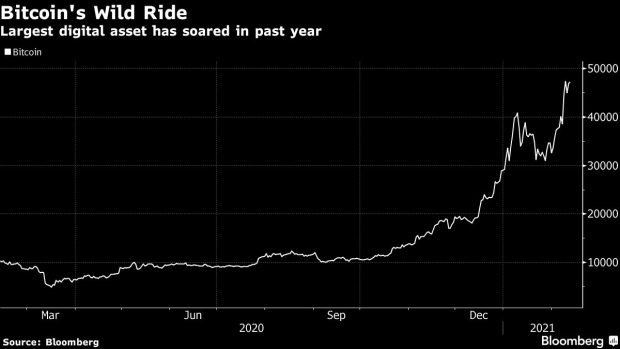 Miami Mayor Francis Suarez speaks to the media during the annual hurricane preparation exercise at the City of Miami's Emergency Operations Center on May 29, 2019 in Miami, Florida. , Photographer: Joe Raedle/Getty Images

The mayor wants to allow the City of Miami’s workers to choose to receive all or a portion of their pay in Bitcoin, according to a draft resolution provided by Suarez’s office. In addition, the mayor proposed allowing people to pay all or part of property taxes or city fees in crypto.

Suarez also wants his city manager to analyze the feasibility to invest a “limited amount of government funds” in Bitcoin, the draft resolution said. It’s not clear how much of that is actually possible: Florida statutes have strict limitations on how local governments can invest surplus funds, generally restricting investments to low-volatility instruments such as those issued by the U.S. government. In the past year alone, Bitcoin has shown it can double in price -- or lose half its value -- in a month’s time.

Suarez, in the resolution, doesn’t seemed fazed by volatility: Miami, the mayor’s resolution said, “is committed to promoting the emergence of Bitcoin as it continues to gain mainstream acceptance.”

The mayor planned to present the resolution for approval to the city’s governing commission as soon as Thursday, which would then have to approve it.

Suarez, who is up for re-election this year, has been courting Silicon Valley investors and technology, portraying himself as a kindred soul willing to consider and promote new ideas. Late in 2020, he started engaging with Silicon Valley technology investors on Twitter, and his efforts to lure them to Miami have become a viral sensation.

The proposal comes in a week when Tesla Inc. disclosed it had made a $1.5 billion investment in Bitcoin, a big vote of confidence from the world’s leading electric-carmaker. Mike Novogratz, the billionaire founder of cryptocurrency investment firm Galaxy Digital, said in an interview Monday that “it’s the messaging that matters,” even if the investments themselves are relatively small.

In the resolution, the mayor described Bitcoin as “an increasingly popular and stable reserve asset for individuals and corporations” and major investors. The plan is part of a campaign to make Miami a city that “embraces new technologies,” the resolution said.

Ken Russell, vice-chairman of the city commission, said he’s “certainly not opposed” to the idea of integrating Bitcoin into the city’s business, but it’s important to ensure “we all know what we’re getting into.”

“What needs to be done is diligence, and not just from the legal perspective,” he said in an interview Wednesday. “It’s not just a currency, it’s a concept.”