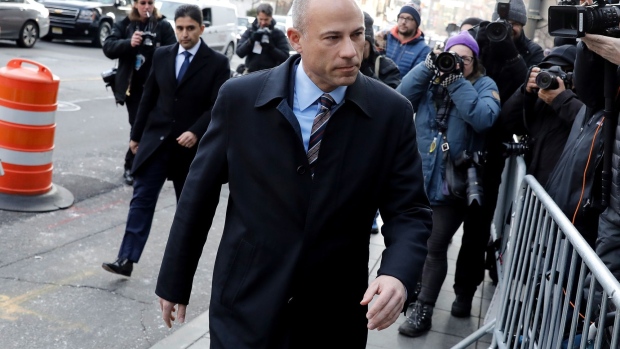 Michael Avenatti, attorney to Stormy Daniels, arrives at federal court for the sentencing of Michael Cohen, former personal lawyer to U.S. President Donald Trump, not pictured, in New York, U.S., on Wednesday, Dec. 12, 2018. Cohen is heading to prison for three years on a gross miscalculation. He was also ordered to forfeit $500,000, pay a restitution of $1.4 million and fines totaling $100,000. , Bloomberg

(Bloomberg) -- Michael Avenatti, the lawyer who represented adult film actress Stormy Daniels in her 2018 lawsuit against then-President Donald Trump, was entitled to a cut of her book deal and didn’t steal payments from the publisher as prosecutors claim, his attorney told a New York jury.

Daniels, who gave Avenatti a token $100 payment for his work on the politically charged suit, is lying when she says Avenatti agreed verbally that he wouldn’t take a share in the book deal, defense attorney Andrew Dalack said on the first day of a federal criminal trial in Manhattan. In fact, Dalack said, they agreed in writing to share in any such deal.

“Does it make sense to you that Mr. Avenatti would sign an agreement entitling him to a fee from a book deal, only to orally later abandon that interest and then steal in plain site what he was previously entitled to?” Daleck said to the jury. “It doesn’t make any sense.”

Avenatti, 50, was charged with wire fraud and identity theft for allegedly forging Daniels’ signature to redirect the publisher’s payments to one of his own accounts. The case is one of several against Avenatti, who claims he was targeted by Trump’s Justice Department as political payback. The lawyer was convicted in 2020 of trying to extort millions of dollars from Nike Inc. in settlement talks for another client.

Prosecutors have said evidence at trial will show that Avenatti pasted an electronic copy of Daniels’ signature on a letter to the publisher to redirect the money and then repeatedly lied to Daniels when she asked where the money was. Daniels discovered the alleged scheme when she went directly to the publisher, which told her the money had been paid, the U.S. says.

Dalack says there is evidence that Daniels asked Avenatti to close her bank accounts to hide money from her estranged husband, requiring Avenatti to use his own accounts to accept the payments from the publisher. The attorney argues Daniels cooked up the story as payback after she lost a separate defamation suit against Trump, resulting in a $293,000 award for attorney’s fees against her. Daniels simply doesn’t want to pay for the work Avenatti did to bring attention to her case, the lawyer said.

Avenatti “transformed a rather obscure adult entertainer into a household name,” Dalack said. “This was not by accident -- this was the result of hundreds of hours of work by Mr. Avenatti, and he accomplished for Ms. Daniels what few other attorneys in America could.”

Daniels, whose real name is Stephanie Clifford, says she had an affair with Trump that began in the summer of 2006 in Lake Tahoe and continued well into 2007. Trump has denied the claim.