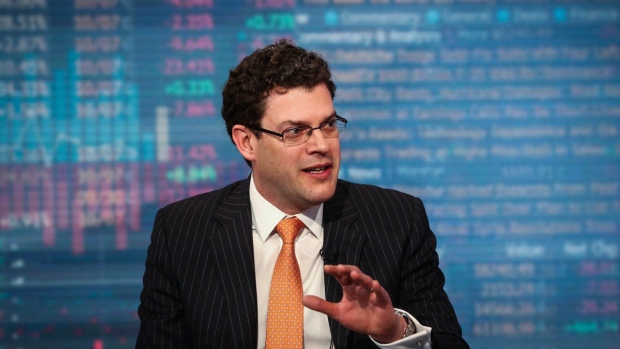 (Bloomberg) -- Argentina’s move to delay a $1.4 billion local bond payment this week hardly made a ripple in the broader world of global investing, with most outsiders seeing it as a sideshow detached from the real drama surrounding the looming default on the country’s billions of dollars of foreign obligations.

Not so for Franklin Templeton and star money manager Michael Hasenstab. The firm owned about a quarter of the notes as of December, according to data compiled by Bloomberg.

It’s just the latest mishap to befall Hasenstab’s foray into South America’s second-biggest economy, where outsize bets have helped make his $26 billion Templeton Global Bond Fund among the worst performing funds of its kind over the past year as prices for Argentina notes plunged. Franklin Templeton funds held Argentine bonds with a face value of at least $4.3 billion, according to the latest filings compiled by Bloomberg.

There are signs things might soon get worse. Late Wednesday, Economy Minister Martin Guzman told investors to brace for a painful debt restructuring as the government seeks to put its finances back on track after a crippling currency crisis and deep recession. He said those expecting friendly terms are misguided -- pushing benchmark bonds down to 45 cents on the dollar -- and that officials won’t allow “foreign investment firms to set the guidelines on macroeconomic policy.”

“It’s necessary to have a deep debt restructuring,” he said at a congressional hearing. “It’s clear that there’s going to be frustration on the part of bondholders.”

Hasenstab’s flagship Templeton Global Bond Fund has lost investors 3% over the past year, worse than 88% of peers, according to data compiled by Bloomberg. While the global fund has several big bets in Argentina, the nation represented just 1.4% of the portfolio, according to the most recent holdings data. Its performance has also been dragged down by an errant bet that Treasuries were due for a severe drop.

In the $9.5 billion Templeton Emerging Markets Bond Fund, which lagged behind 98% of peers in the past year, Argentina comprises 5.6% of the total holdings.

Franklin Templeton declined to comment on the firm’s investments in Argentina or the performance of its funds.

Hasenstab first amped up his bets on Argentina in 2016, when he bought local bonds on expectations the country would turn an economic corner. Instead, the economy is expected to contract for the third straight year in 2020 with inflation above 50%, high unemployment and a third of the population living below the poverty line. The peso has plunged 70% since the end of 2017, the worst performance among some 140 currencies tracked by Bloomberg.

Hasenstab’s penchant for sticking to his guns during turbulence that would cause other investors to run for the exit, may not have served him well. He added to his bet in the country in 2018, when other institutional investors were fleeing, buying $2.3 billion in peso-denominated securities after a currency crisis sparked the government to seek a record credit line with the International Monetary Fund.

But Argentine bonds and other assets continued to flounder and then cratered in August, after President Alberto Fernandez defeated pro-market leader Mauricio Macri in primary elections by a far wider margin than any poll had forecast.

Argentina’s overseas bonds have declined 46% since the end of 2017. Only notes from Venezuela and Lebanon have fared worse during that span.

Of course just a few years ago Hasenstab was a high-flying star in the bond world, known for taking huge positions on risky debt in Ireland, Hungary and Ukraine and wringing out value from restructurings. In the decade through 2013, the Global Bond Fund ranked No. 4 in returns among 113 U.S.-based fixed-income funds tracked by Bloomberg. Assets under management across all his funds grew to $190 billion at the time from less than $2 billion in 2001.

“I’m comfortable going through periods of pain, sweat, and tears, knowing there’s a reward at the end,” Hasenstab said in a 2016 interview.

One potential problem created when Hasenstab stakes out a large position in a country is that it can be hard to unload the debt quickly, because the number of buyers who would be interested in taking on huge positions is limited.

Franklin Templeton is one of the biggest foreign investors in Argentina. Its peers include big names like BlackRock Inc. and Fidelity, which are forming a bondholder committee ahead of the country’s debt talks.

It isn’t at all clear that there will be much of a reward for investing in Argentina if and when the country comes to a restructuring agreement with creditors. Guzman, the Economy Minister, intends to provide a formal offer by the second week of March and finish talks by the end of that month, a timeline many economists say is very tight.

Lots of investors got caught up in the excitement that surrounded Argentina a few years ago, after Macri took over as president and reached a deal to settle a decade-old dispute with creditors, according to Siobhan Morden, the head of Latin America fixed income strategy at Amherst Pierpont.

“You can talk for hours about how small mistakes became big mistakes, but back then, there was clearly optimism,” she said in an interview. “If you’re a large creditor with a long position in Argentina, you don’t have many options at this point. That said, Argentina should pre-negotiate with these large holders if they want to successfully restructure their debt.”

--With assistance from Ben Bartenstein.

To contact the editors responsible for this story: Carolina Millan at cmillanronch@bloomberg.net, Brendan Walsh, Daniel Cancel