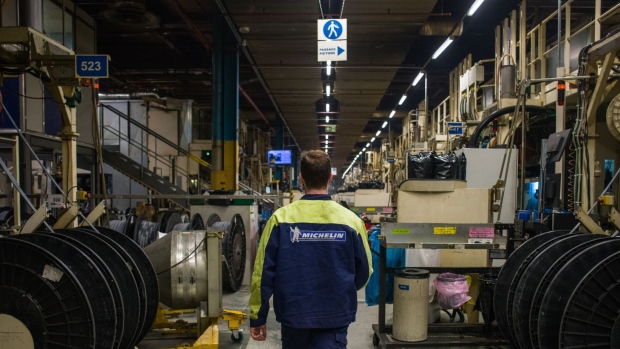 An employees walks past reels of rubber on the production line at the Michelin Gravanche manufacturing plant in Clermont Ferrand, France, on Wednesday, Feb. 16, 2022. Michelin said this year will be just as much of a struggle as 2021 as severe bottlenecks in supply chains and transportation routes drive up costs. , Bloomberg

Car sales crimped by semiconductor shortages may take until 2024 to recover, even assuming the global economy endures a mild recession rather than a deep slump, said the chief executive of French tiremaker Michelin.

“As we were discussing last year, my estimate was that we will not go back into real recovery before mid-2023,” Cie. Generale des Etablissements Michelin Chief Executive Officer Florent Menegaux said Saturday in an interview with Bloomberg Television.

At this point the auto recovery looks more likely to happen in 2024 absent a deep recession, he said, adding that he foresees a “mild” global economic downturn for now.

While the global car market may rebound toward its pre-pandemic level that year, European sales could lag as consumers hesitate on which type of vehicle to buy amid more stringent environmental regulations, which may affect their cars’ value on the second-hand market, he said.

Menegaux said that tires for new cars represent just 13% of the group’s revenue.

The French company has been hit indirectly by semiconductor shortages because the delivery of equipment used to manufacture tires has been delayed, he said.

Michelin must also cope with rising transport costs, -- partly spurred by trucker shortages after thousands of Ukrainian drivers returned home to fight Russia’s invasion -- and by soaring energy prices, especially in Europe “where it will be tight in supply and expensive,” he said.

The firm has raised tire prices three times in the past six months to protect the group’s margins from an estimated 2.4 billion-euro ($2.44 billion) increase in its input costs this year, Menegaux said. “Fortunately, our customers are still willing to pay for our tires,” he said.

“We have experienced an accumulation of crises which is unprecedented,” he said. “We now know how to operate in this hectic environment.”