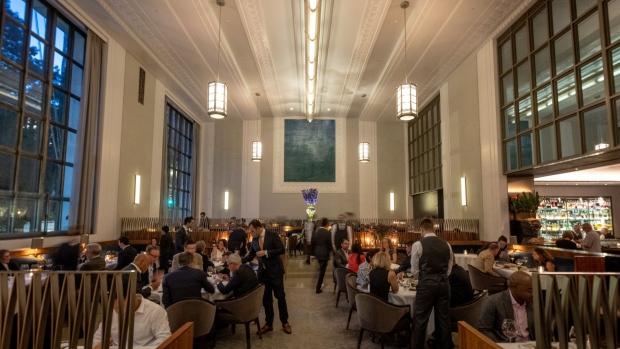 One of the country’s most famous restaurants, Carbone, is no longer Michelin-starred. Photographer: Amir Hamja/Bloomberg , Bloomberg

(Bloomberg) -- In the world of Michelin star rankings, change comes slowly. But when it comes, it’s monumental.

Carbone, Marea, and Peter Luger—three restaurants that have defined New York’s power dining scene over the past several decades—all lost their stars. “This year in New York, there’s a feeling of evolution,” says the chief inspector of Michelin’s North America team, who spoke on condition of anonymity because of the nature of his job.

The international restaurant guide announced its rankings on Oct. 6 at a live event in Manhattan’s Hudson Yards.

At the top of the list, the five three-star restaurants—where the food is “exceptional” and “worth a special journey”—remained locked in place, as they’ve been since 2018. Despite the controversy that’s attached itself to Eleven Madison Park and its $365 vegan tasting menu, the restaurant retained its top ranking. So did Midtown mainstays Le Bernardin, Masa, Per Se, and Chef’s Table at Brooklyn Fare, dining rooms that seem fated to hold on to their stars like generals from long ago battles.

Although there’s been excitement attached to Atomix, the exquisite Korean tasting menu spot that ranked No. 43 on the World’s 50 Best Restaurant list this year, there was no promotion from the two-star category.

Two restaurants that opened within the past year were promptly awarded two stars (designated as “excellent cuisine”). Al Coro, in the former Del Posto space, opened its doors just in June; still, inspectors celebrated chef Melissa Rodriguez’s modern Italian tasting menu. “I know they’ve only been open for four months but what she’s doing is extraordinary,” said Aquavit chef Emma Bengtsson. “And I’m happy to see what she’s up to.”

The other new two-star, Saga, boasts the best view of any dining room in New York, with panoramic vistas from the 63rd floor of 70 Pine St. in the Financial District. Chef-owner James Kent split earlier this year from former co-owner Jeff Katz, who, as it happens, operates Al Coro.

There are now 73 starred dining rooms in New York; last year there were 68. Besides the new two stars, 17 restaurants were added to the one star (“high quality cooking”) list. Among them are Mari, the compelling Korean hand roll location in Chelsea, and Semma, which has quickly garnered a reputation for thrilling southern Indian cooking from chef Vijay Kumar. But the list also added the very well established, vegetable-centric Dirt Candy from chef Amanda Cohen, which has been around since 2008.

Roni Mazumdar, one of the owners of Semma, said he was “still processing” the restaurant’s new star. That Michelin recognized Semma’s regional South Indian fare “as something that represents who we are and truly where we come from, means the world.” He believes such nods will further support next-generation chefs who are expressing themselves through food that speaks to their heritage.

This was the first year that Michelin recognized vegan cooking in New York in a significant way. Along with Eleven Madison Park, the Italian plant-based Soda Club was given a Bib Gourmand, or cheap eat, award. Michelin announced that list at the same ceremony.

Most of Michelin’s energy was focused on Manhattan. Only one new restaurant outside the borough was added: Clover Hill, in Brooklyn Heights, which received a star. It was, however, a very good year for Midtown and downtown. Business districts might still be struggling to bring office workers back, but places like Le Pavillon, the tree-lined French dining room from star chef Daniel Boulud in One Vanderbilt, and Saga in the Financial District got the attention of Michelin inspectors.

“New York did always show an impressive resilience, but it’s a city emerging strong and fast out of the pandemic,” says Gwendal Poullennec, the guide’s international director. “You feel the vibe, New York is shining very bright as a capital gastronomy city of the world.”

Which makes the places that are missing from this year’s list especially striking. Carbone has, for better or worse, been called “the most celebrity-studded restaurant on earth.” Inspectors were less impressed, downgrading it to merely “recommended.”

The most notable loss, however, is for Marea, the ambitious Midtown pasta and seafood destination, which as recently as 2019 had two Michelin stars. “It has a history of meals not quite convincing us,” says the Michelin inspector. “These decisions aren’t made in a year, it’s a longer time span.”

The announcement event filled Peak, the restaurant adjoining The Edge at Hudson Yards. Guests tried foods from Don Angie, Sushi Noz, and Semma, and celebrated a renewed excitement for dining both in New York and worldwide. It was a fitting buzz, given the view of the city stretching out from three directions from the 101st floor.

The Michelin Guide has routinely had a positive economic impact on restaurants that are featured in it. A 2019 Ernst & Young LLP study found that 71% of frequent travelers said they would increase spending if a Michelin Guide selection existed; whether that has changed as a result of the pandemic remains to be seen. The global culinary tourism was estimated to be worth more than $696 billion last year.

The full list of stars follows, along with designated neighborhoods. An asterisk (*) denotes a new selection.

(Adds information about Semma in the seventh paragraph, with quote from chef.)