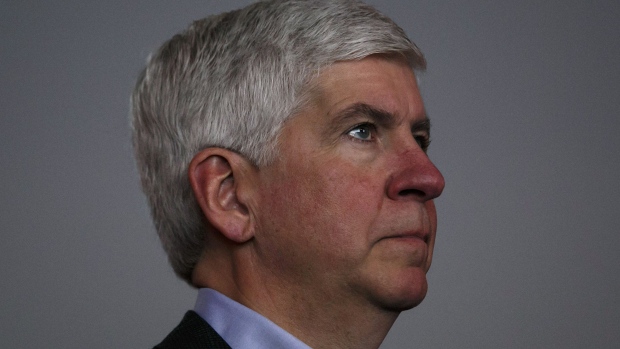 (Bloomberg) -- Former Michigan Governor Rick Snyder and eight other former state officials could face jail time after the state levied criminal charges against them for alleged mismanagement tied to lead contamination of the water supply in the city of Flint.

In a statement earlier, Snyder’s attorney said the charges against the former governor were “wholly without merit.”

“It would be a travesty to waste additional taxpayer dollars pursuing these bogus misdemeanor charges,” defense attorney Brian Lennon said in an emailed statement. “We are confident Gov. Snyder will be fully exonerated if this flimsy case goes to trial. Today’s charges do nothing to bring justice to the people of Flint. These unjustified allegations do nothing to resolve a painful chapter in the history of our state. Today’s actions merely perpetrate an outrageous political persecution.”

The crisis in Flint, a majority-Black city of about 100,000, stems from a cost-cutting decision in 2014 to temporarily rely on the Flint River for drinking water. Officials later determined that contaminants in the river water leached lead from pipes, thus fouling the water for thousands of the residents of the rust-belt city.