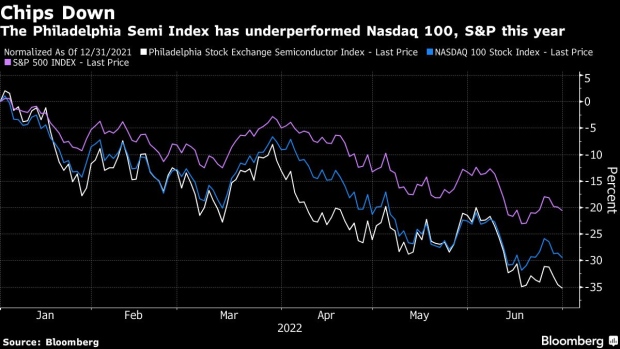 (Bloomberg) -- Global semiconductor stocks were under pressure on Friday after Micron Technology Inc.’s profit warning that flagged demand was cooling for chips used in computers and smartphones.

The largest US maker of memory semiconductors said it is moving swiftly to stave off a chip glut. That’s a big reversal in trend in an industry that suffered from a crunch since 2020, when the pandemic created a combination of high demand and supply-chain bottle necks hurting production of everything from home appliances to cars.

Fears of an impending global recession and rising levels of inflation are forcing consumers and businesses to rein in spending. Worldwide PC shipments are on pace to decline 9.5% in 2022, according to research firm Gartner Inc.

“The second half of the year is off to a rather inauspicious start following downbeat commentary from Micron, which had negative implications for smartphones, data centres and overall demand for consumer discretionary goods,” said Jim Dixon, a senior equity sales trader at Mirabaud Securities. “The disappointing guidance might be the prelude to an ‘earnings recession’.”

Adding to woes was a Digitimes Asia report that the world’s largest contract chipmaker, Taiwan Semiconductor Manufacturing Co., has seen its major clients cut their chip orders for the rest of 2022.

The Bloomberg Asia Pacific Semiconductors Index fell for a third day to its lowest since July 2020. TSMC and South Korean memory-chip giant SK Hynix Inc. both dropped more than 3.5%.

In Europe, chip tool makers including ASML Holding NV slid as much as 4.9% before paring losses. Chipmakers from Infineon Technologies AG to STMicroelectronics NV also fell, sending the Stoxx 600 Tech Index down for a fourth day.

Micron forecast fourth-quarter sales of about $7.2 billion, well below the analyst estimate of $9.14 billion. The grim outlook shone the light on two key markets for Micron’s memory chips: computers and smartphones.

The revenue guidance miss of about $2 billion “was attributed to weakness in both mobile and PCs as well as demand and supply issues in China,” Piper Sandler analyst Harsh Kumar wrote in a note, where he slashed his price target to a Street low. “The company is taking immediate action to reduce supply growth and planning for reduced levels of bit supply growth in 2023.”