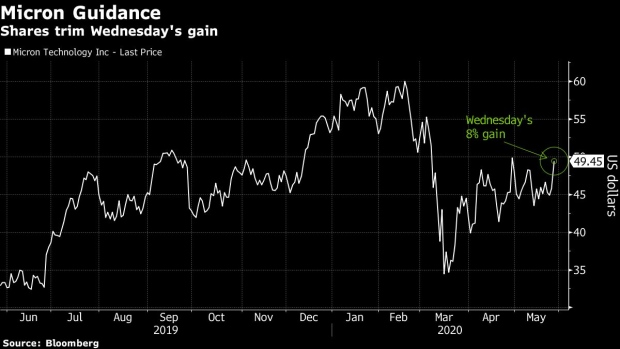 (Bloomberg) -- Micron Technology Inc. fell as much as 2% premarket Thursday, after surging 8% on Wednesday when it raised its revenue forecast for the current quarter, citing strong chip demand from cloud providers. Analysts applauded the improved guidance and BofA analyst Simon Woo wrote that Micron’s CEO indicated it was seeing stronger chip demand and better average selling prices, helped by the remote-work economy.

Here’s more of what analysts had to say:

The future remains bright for Micron after raising guidance for May quarter, the analyst wrote.

“During the conference presentation, MU noted the May Q strength was driven by both NAND/DRAM tracking favorably on the demand side plus a better than expected recovery on the supply side where management had factored some conservatism into the guide due to Covid-19 disruptions.”

Management “remains cautiously optimistic on sustaining the current business performance into the August Q, but given it is a 14-week quarter, ‘that would suggest some sequential revenue growth into August’”.

“The update is a clear positive for Micron, with memory trends holding up amidst Covid-19 pressure and exceeding investor expectation on growing concerns over falling spot memory prices.”

Micron now sees “upside to the May quarter as the supply disruptions they were experiencing when they guided back in March have now been resolved.”

“Pricing was also more favorable vs Micron’s assumptions in March, which we also attribute to the supply disruptions”.

“While demand visibility remains limited, we think it’s more likely that near term trends have been driven by supply fears rather than demand trends, though data-center does appear resilient.”

“Our recent market survey indicates DRAM pricing will weaken in 2H20 due to elevated inventory at both cloud and mobile customers.”