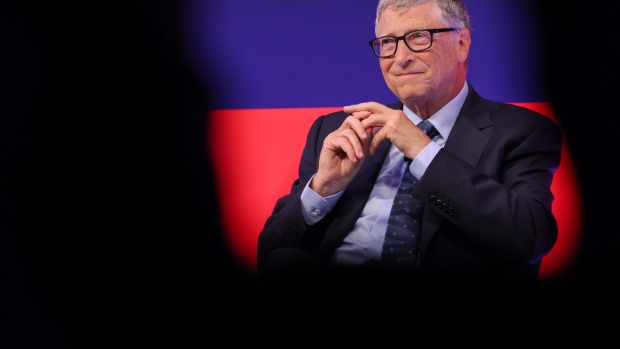 Bill Gates, co-chairman of the Bill and Melinda Gates Foundation, during the Global Investment Summit (GIS) 2021 at the Science Museum in London, U.K., on Tuesday, Oct. 19, 2021. U.K. Prime Minister Boris Johnson is hosting the summit, where as many as 200 CEOs and investors are expected to gather. , Bloomberg

(Bloomberg) -- Microsoft Corp. shareholders called on the software maker to reassess its approach to sexual harassment in a vote Tuesday, following reports that co-founder Bill Gates behaved inappropriately toward female employees years ago.At the company’s annual meeting, investors passed a nonbinding resolution seeking a report on the effectiveness of sexual-harassment policies. The proposal, introduced by activist investor Arjuna Capital, was opposed by Microsoft. A separate measure calling on the company to disclose median pay gaps across race and gender didn’t pass.

“We are concerned about Microsoft’s alleged continued culture of workplace sexual harassment and its history of unfulfilled previous commitments to resolve it,” Natasha Lamb, Arjuna’s managing partner, said during the meeting. Lamb said Microsoft has refused to commit to two key requests in the the proposal: “independent investigations and public reporting on the executive-level probe into Mr. Gates.”

In response to the vote, Microsoft President and Chief Legal Officer Brad Smith said the company will take new steps to provide more information about sexual-harassment investigations to shareholders. In the most recent fiscal year, which ended June 30, Microsoft had 51 complaints and 47% were substantiated. That’s a smaller number of complaints than the year earlier, probably because people were working from home, Smith said.

Smith also said the company will bring in a third party to do an independent assessment of how well it investigates these kinds of claims. He didn’t address requests for more information about a probe into Gates’s behavior.

Prior to the meeting, Microsoft reached accords with two other shareholder groups, agreeing to a human rights review on some government deals and to let more repair shops fix its devices. On the issue of pay gaps, Microsoft also said it would provide more data next year.