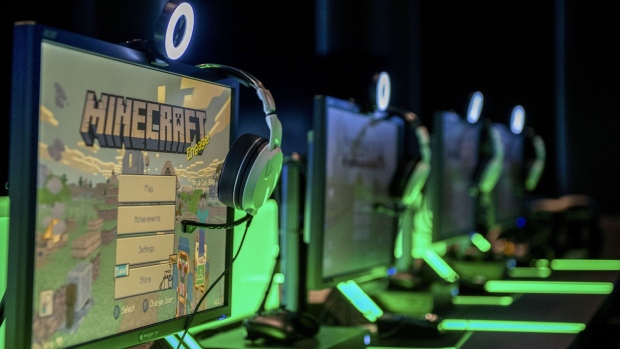 (Bloomberg) -- Minecraft, the virtual world game Microsoft acquired in 2015 , is seeing a boom in play as the Covid-19 pandemic shutters schools and leaves kids stuck at home.

The number of new installations of Minecraft across Xbox One, Windows 10, the Xbox Game Pass subscription, PlayStation 4, Nintendo Switch, iOS, and Android rose 25% in April from March, Microsoft said Monday. That brings the total number of people playing Minecraft each month to more than 126 million, Microsoft said. Multiplayer sessions jumped 40%, indicating gamers are using Minecraft’s pixelated world to connect with friends they can’t see in the real one.

The newest version of the game, called Minecraft Dungeons, is set to go on sale later this month. Delayed from April because of the virus, Dungeons is an action and fantasy game that has players roam through an underground space, fighting, collecting resources and taking on quests.

Now in its 10th year, Minecraft has sold more than 200 million copies, making it the best-selling video-game ever, according to the company.