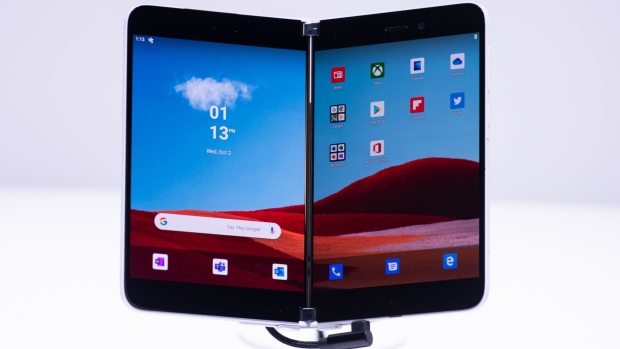 Microsoft Corp. begins taking orders for its dual-screen Surface device in the U.S. on Wednesday, an attempt to re-enter the mobile handset market with a product that blends the features of a tablet with those of a phone.

The Android-powered Surface Duo starts at US$1,399 and will be available Sept. 10, said Microsoft Chief Product Officer Panos Panay. The device will be sold on Microsoft.com as well as by AT&T Inc. and Best Buy Co. It is the thinnest Surface ever, with screens that unfold completely to serve as a phone or act like a book to provide more space for different apps.

The gadget represents Microsoft's return to the handset market following an ignominious retreat in 2016 after the company’s acquisition of Nokia’s handset unit crashed and burned in a costly writedown. It’s also the company’s first Surface device running Google’s Android operating system, which Windows Phone once sought to vanquish. Why Android? Panay told reporters it came down to the need for apps — Microsoft's previous efforts were largely doomed because of the lack of mobile developer support.

“The product was built as the Microsoft you love and the Android you know,” Panay said. The gadget’s OLED displays measure 5.6 inches individually or 8.1 inches taken as a whole, with Microsoft promising “all-day battery life.” It’ll have either 128GB or 256GB of internal storage, 6GB of memory, a Snapdragon 855 processor from Qualcomm Inc., and will work on the wireless networks of Verizon Communications Inc., AT&T and T-Mobile US Inc.

The U.S.-only release will disappoint international fans of the Courier concept device that Microsoft teased a decade ago — it’s the original “digital notebook” inspiration underpinning the Surface Duo and something that enthusiasts have been asking to see as a real product for a long time.

Microsoft’s hinge-and-two-screen approach is less futuristic than devices from the likes of Samsung Electronics Co. with a single screen that folds in the middle.  To make it work, the Duo has 56 cables connecting the two screens with the batteries and mainboard split between the two halves.

The device has a 360-degree hinge and can be used in vertical or horizontal orientation. Different apps can run on each screen or an app can be spread across both screens for things like gaming or a larger view.

Users can create app groups — a blend of two apps that open with one click. Microsoft Chief Executive Officer Satya Nadella has used this to combine the Kindle app and Microsoft’s OneNote so he can take notes while reading.  To watch video, you can open the hinge partially and turn one side of the Duo into a stand.