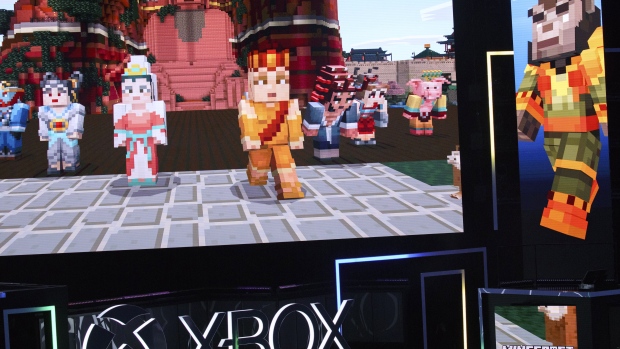 Minecraft characters are displayed on screens during the Microsoft Corp. Xbox One X reveal event ahead of the E3 Electronic Entertainment Expo in Los Angeles, California, June 11, 2017. Bloomberg/Patrick T. Fallon

The clip, screened at the software maker’s Build developer conference Monday in Seattle, showed a user leaving a mobile phone on a bench and another person picking it up and using it to view a 3-D Minecraft hologram. May 17 is the 10th anniversary of the original release of Minecraft, a cult-favorite game that lets players build virtual worlds. The company showed the video to close Chief Executive Officer Satya Nadella’s keynote speech.