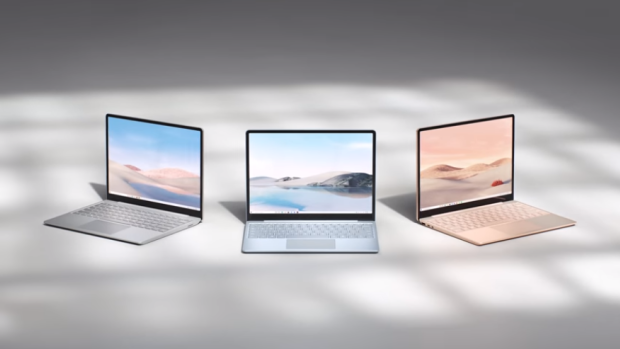 Microsoft Corp. unveiled the cheapest-ever model of its Surface laptop, aiming to take a larger share of the lucrative notebook computer market by targeting students and budget shoppers.

The Surface Laptop Go, starting at US$549, is smaller and lighter than the company’s other notebooks and has a fingerprint scanner to log in. The device comes in three metallic finishes — ice blue, platinum and a pinkish-gold color that Microsoft calls sandstone, and has 13 hours of battery life and an Intel Corp. processor. Customers can pre-order Thursday ahead of the laptops’ availability  on Oct. 13, Surface Vice President Pete Kyriacou said.

Microsoft is releasing its second laptop, expanding the Surface product line in the traditional notebook-computer market after starting off by pioneering a different type of device -- the two-in-one or detachable tablet, which consists of a touch-screen that separates from a keyboard. Apple Inc.’s cheapest laptop is the US$999 MacBook Air, while Google-software based Chromebooks from various manufacturers start at about US$250 for a decent model. Google's Pixelbook Go, that company’s lower-end laptop, retails for US$650.

The software maker uses the Surface business to showcase its Windows and Office programs and to experiment with different hardware designs. Microsoft has a far smaller position in the notebook market than the detachable-tablet space, where it’s No. 2 behind Apple. In the June quarter, Microsoft sold more than 1.61 million detachable machines and 245,934 laptops, according to IDC. The laptop market is a far larger prize, worth nearly US$44 billion in the June period, compared with less than US$10 billion for detachable tablets, IDC said.

In the year ended June 30, Surface sales rose by eight per cent, or US$457 million, Microsoft said in a filing, without specifying total revenue. That’s a slower rate than the 23 per cent increase the year before. The company reported US$6.46 billion in devices revenue for the year, a metric that includes Surface devices, as well as mice and keyboards.

The Redmond, Washington-based company also unveiled a new Surface Pro X, an update to its detachable tablet device that runs a custom chip developed with Qualcomm Inc. and using ARM Ltd.’s technology. The new model is faster and gets 15 hours of battery life, said Robin Seiler, a Surface vice president, in a video shared with reporters. The updated versions of the Pro X start at US$1,499.