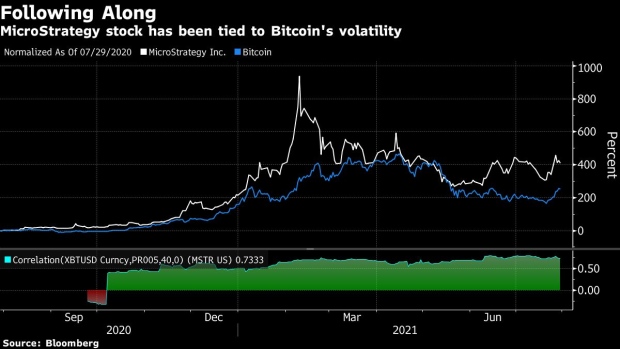 (Bloomberg) -- MicroStrategy Inc.’s big, and growing, bet on Bitcoin has the company sitting on massive paper gains despite having to write off millions in accounting charges related to the token.

The tech company’s 105,085 Bitcoin would produce a paper gain of about $1.4 billion if sold at Friday’s prices -- that’s more than double what MicroStrategy has posted in cumulative earnings in the last 25 years, data compiled by Bloomberg show. That nominal gain is also more than three-times the revenue generated by the company since it adopted Bitcoin as its primary treasury asset last August.

Read more: How to Boost Bitcoin Bet is All MicroStrategy Bulls Want to Know

Perhaps not surprisingly, Chief Executive Officer Michael Saylor said in the quarterly statement on Thursday the company plans to use additional capital to help fund its ongoing digital asset strategy -- which means more crypto. MicroStrategy had roughly 105,085 Bitcoins as of June 30, at an average cost of $26,080 compared to Friday’s level of $39,050, the report showed.

Bitcoin holdings come at a cost though. The company disclosed in its quarterly statement cumulative impairment losses of $689.6 million related to the digital asset.

Do shareholders, many of whom use the stock as a vehicle to invest in Bitcoin, care? While MicroStrategy shares are up 60% this year they have shed half their value from a February record amid Bitcoin volatility. They traded 2% lower on Friday at $612.27.