Cryptocurrency-related stocks plunged on Monday as Bitcoin tumbled to its lowest level in 18 months amid a deepening selloff in risk assets and after a crypto lender halted withdrawals from its platform.

MicroStrategy Inc., which over the last two years has amassed more than 129,000 Bitcoin tokens, led the slump, plunging as much as 28 per cent -- its biggest drop since 2017. Other crypto stocks including Marathon Digital Holdings Inc., Riot Blockchain Inc. and Coinbase Global Inc. also saw outsized declines of at least 15 per cent each. The MVIS CryptoCompare Digital Assets 100 Index, which measures the 100 largest digital assets, sank as much as 15 per cent. 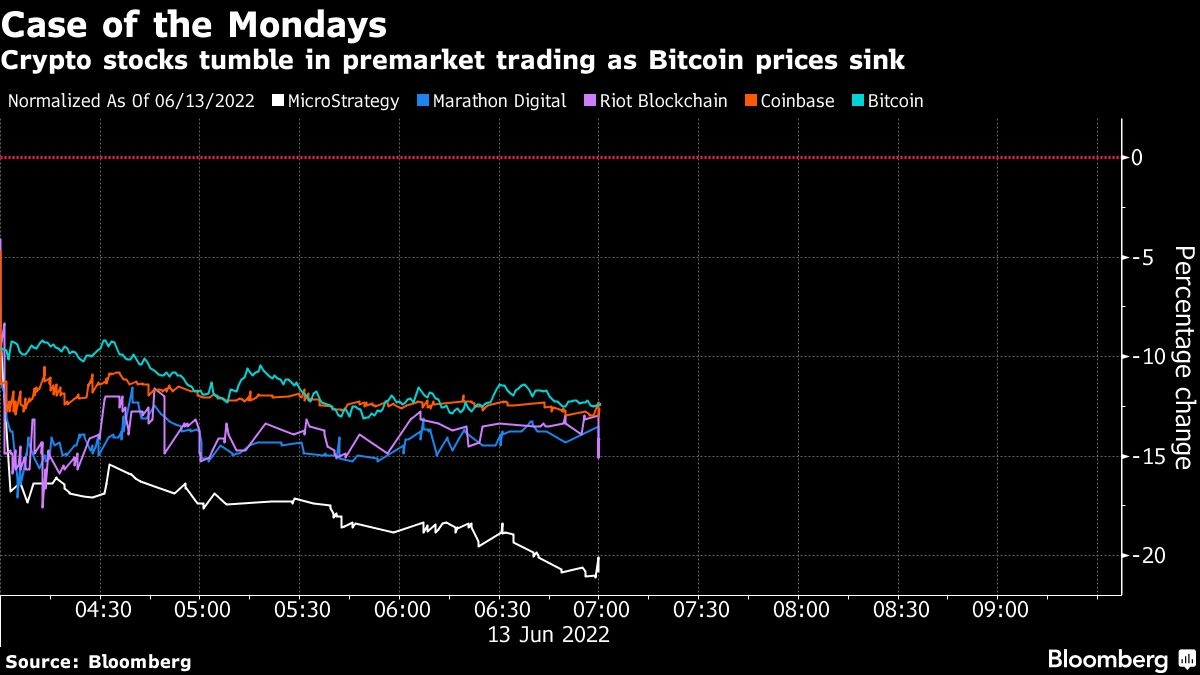 The sharp move lower in Bitcoin came as crypto lender Celsius Network Ltd. said it was pausing withdrawals, swaps and transfers on its platform. Concerns surrounding the sustainability of the high yields offered by the firm have surfaced in recent weeks following the collapse of the TerraUSD (UST) stablecoin, which promised yields of as much as 20 per cent to depositors.

“Crypto fans have become used to volatile rides, but these rollercoaster descents are increasingly hard to stomach,” said Susannah Streeter, senior investment and markets analyst at Hargreaves Lansdown. “With the era of cheap money coming rapidly to an end, traders are becoming much more risk averse and turning their backs on crypto assets.”

Crypto stocks have been under pressure for months as the prospects of higher interest rates, a possible recession and the collapse of the Terra/Luna ecosystem in May weighed heavily on investor sentiment. The CoinShares Blockchain Global Equity Index, which tracks 49 firms from around the globe with crypto exposure, has fallen more than 38 per cent so far this year, on pace for its worst annual performance on record.

While risk assets more broadly are lower Monday morning, the plunge by crypto stocks has been exacerbated by the rapid drop in Bitcoin prices. The world’s largest digital asset sank as much as 15 per cent and broke below the US$24,000 level as it fell for a seventh day in a row.